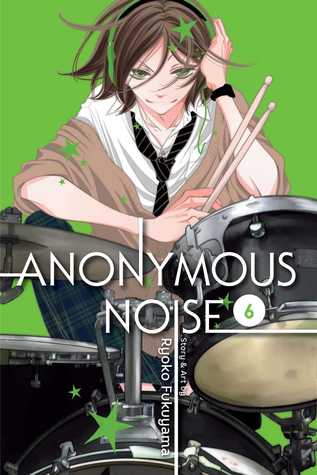 Anonymous Noise, Vol. 6 by Ryōko Fukuyama
My rating: 4 of 5 stars

In No Hurry’s Rock Horizon performance ends in a whirl of frantic passion, but does Nino’s voice reach Momo? And with the school festival coming up, the Pop Music Club prepares for its first performance in a long time…with things between Haruyoshi and Miou suddenly heating up!

With Momo doing another disappearing act, Nino is left feeling once again like her voice didn’t reach him. Her rage fuels her in the aftermath, including the present time which is three months after the Rock Horizon as they are evaluating the response to their album and performance (they kinda lost out to Silent Black Kitty). Yuzu and Nino are also at odds, with a lot of tempers flaring with angst mixed in. Amidst this, Nino’s and Miou’s interactions feel like a breath of fresh air, even though they are tinged with the latter’s envy. To get over Yuzu, Miou accepts Haruyoshi’s feelings, but they are still in the awkward phase of their relationship where one knows the other isn’t in love with them yet. And all this against the backdrop of the school festival where a popular artist is coming! Meanwhile, Momo himself has transferred to another school, cut off communications, and Silent Black Kitty has had to search for his replacement. In the silence, they are all waiting for the next step to take, and honestly I feel this dude should get his feelings in order and face them. None of that insulting and running away BS anymore.