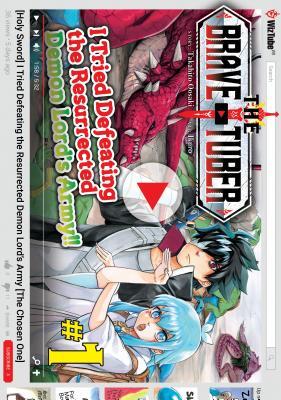 The Brave-Tuber Vol. 1 by Takahito Oosaki
My rating: 4 of 5 stars

Vlogging has come to…the world of magic?! A sword and sorcery manga for the internet age!

With the revival of the Demon Lord, chosen ones able to wield holy swords have appeared to fight evil. But the Demon Lord is not the only thing turning the world upside-down: the internet has arrived in Wizdaregidor! Adventurer Zane and sword spirit Kuku are determined to become WizTuber stars, making videos on everything from “I Tried to Fight in Cursed Armor!” to “I Made a Giant Slime!” Will they defeat the Demon Lord?! More importantly, will they get more followers?!

Just the concept of ‘vlogging in a fantasy world’ was enough to get me invested in this book! I mean, imagine the hilarity in having heroes have social media platforms! And the book makes good use of that concept! Zane and his holy sword spirit, Kuku, are quite good at vanquishing demons – however, they are not very popular online. And in real life, they aren’t believed at all. So this means that Zane and Kuku try to think up ideas to spruce up their vlog while they wait for a patron to fund their quest to defeat the Demon Lord. Unfortunately, because Zane’s slaying style lacks any drama and he finishes it up ASAP, no one is interested much in his channel. They get an uptick in followers when he defeats a high ranking minion of the Demon Lord, but its mostly trolls of the Demon Lord (some literal, some metaphorical, I’m assuming) who only did it to write mean comments! Taking inspiration from other successful hero vloggers also fails spectacularly. Meanwhile, the Demon Lord is also invested in their channel, and especially in following Kuku’s Twitter(-esque) account to keep tabs on them. The artwork is good, and I love the creature designs. Overall, its a bit silly, but it is so much fun and quite hilarious!