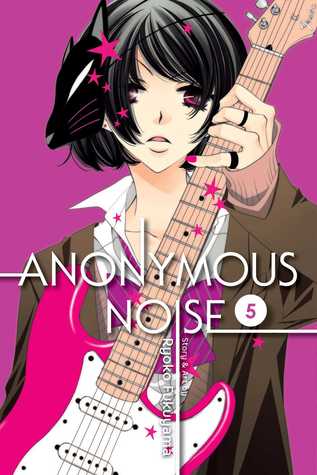 Anonymous Noise, Vol. 5 by Ryōko Fukuyama
My rating: 3.5 of 5 stars

Nino is determined to become a guitarist good enough to play onstage, and the members of In No Hurry have gathered for a weekend training camp to support her! Meanwhile, Momo makes a decision regarding his feelings for Nino and seeks her out once more…

With In No Hurry heading to Rock Horizon with their rivals Silent Black Kitty performing, too, Nino throws herself into polishing her skills, and getting enough guitar training by then. When Momo called her band shitty, she took it to heart because she thinks her skills are rough compared to the rest of the band. Most of the story arc here happens at the rock festival, where Nino is once again pushed to her extremes, as Momo drops a bomb on her right before her performance. It is an intense performance that ensues, with the other boys having to keep up with her frenetic energy. Meanwhile, Yuzu has his own problems at home, with his mother realizing that he has been writing music again and him running away from home (again) because of it. I don’t exactly understand why she doesn’t want him to even write music, but something seems odd here. Earlier I thought it maybe was that he had damaged his voice but this seems more psychological control than for physical well-being. It was, as always, an intense and angst-y story arc, but with some dramatic performances thrown in. I love how the artwork renders that energy that they have during their sets. It really does make you feel like you are there.