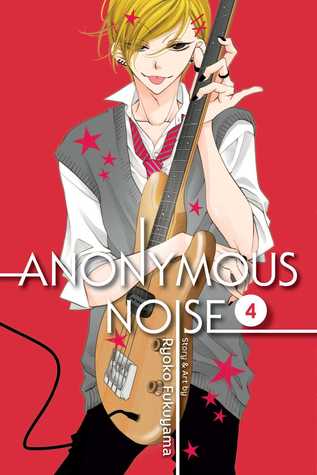 Anonymous Noise, Vol. 4 by Ryōko Fukuyama
My rating: 3 of 5 stars

Music and longing collide in this ballad of unrequited love!
Nino Arisugawa, a girl who loves to sing, experiences her first heart-wrenching goodbye when her beloved childhood friend, Momo, moves away. And after Nino befriends Yuzu, a music composer, she experiences another sad parting! With music as their common ground and only outlet, how will everyone’s unrequited loves play out?
Yuzu thought he’d resigned himself to just being friends with Nino, his “Alice.” But now that he’s faced with the prospect of losing her voice to Momo, he’s having second thoughts–and has resolved to take them to Momo directly! Meanwhile, the feelings that Momo has been hiding for so long seem to have reached a breaking point!

I think I have reached the point where I can say: Too MUCH Angst, OMG. So, after Yuzu suddenly kissed Nino (why would you even do that, dude) and she stops talking to him, he scrambles for a way to make it right. After much apologizing and assuring her it wasn’t because he was in love with her, they get back together as friends. Meanwhile, Nino has been re-evaluating what makes her singing powerful – her past live performances for the band were done when she was emotionally stressed, but they still turning out good doesn’t mean it will always be so. So, she is trying to figure out how to bring that same raw power to her singing in normal circumstances, while also side-eyeing the guitar she got from Momo. A major storyline in this book was the past of In No Hurry – as in, how they were formed, and how Nino was a catalyst for it. I am still, however, very interested in why Yuzu’s mom is such a hardass towards him about music.

The romance front is quite messy, and shows no sign of untangling the web of unrequited love. We have Haruyoshi in love with Miou in love with Yuzu in love with Nino, who is in love with Momo, and supposedly Momo has a girlfriend, who I really hope is not that Tsukika (mostly because she definitely isn’t a high school girl and he is 15). Then comes the fact that Momo and Yuzu are being petty AF about ‘ownership’ of Nino’s voice; both of them think the other is manipulating to steal her away from him, as if she has no agency in this matter. Sure, teens can be messy and impulsive, but even their childhood selves would be side-eyeing them right now. Look, the girl is an airhead most of the time, but she sorta knows what she wants, okay? The slight relief in this messiness comes in the fact that we see Nino interact a bit more with Miou and more importantly, Haruyoshi; now we only need a heart-to-heart with Kuro, as it seems they only interact with her through Yuzu. There was also a nice bit of band solidarity as they decide how to keep the Alice image.

Overall, this volume is full of angst, but also has some backstory to make up for it.

One thought on “Review: Anonymous Noise, Vol. 4 by Ryōko Fukuyama”