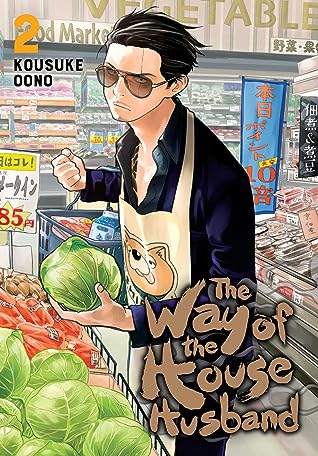 The Way of the Househusband, Vol. 2 by Kousuke Oono
My rating: 5 of 5 stars

A former yakuza legend leaves it all behind to become your everyday househusband. But it’s not easy to walk away from the gangster life, and what should be mundane household tasks are anything but!

Note: Not a YA novel, but suitable for YA audiences

Words cannot describe how much I loved this installment of Gokushufudou but I’m going to try, y’all! Tatsu has more ‘retired yakuza househusband’ gaffes lined up in an even more hilarious volume. First, he joins up the local rec center for exercise classes – aerobics, yoga, and such, but good god he is so earnest about it all! His smile during aerobics is scary (I burst out laughing), his comments on yoga poses being similar to some gangster positions prompts a ‘sharing is not always caring’ comment from one of the other housewives, and they all later on have an awesome volleyball match against a gangster posse?! Tatsu just can never half-ass things, be it dishing up a sweet treat or impressing his in-laws. Even meeting a former acquaintance who has a bone to pick with him ends up in being a culinary duel, with Instagram as the judge! He’s unintentionally scary even while selling off some old things, making another mob dude misunderstand everything and literally go weak in his knees out of fear. And boy, did I love some more backstory about he and his wife – from the eyes of his father-in-law who is trying to bond with him. Tatsu’s expressions and comments are just gold – I was laughing throughout! But OMG his best line was ‘the best prize is my wife’s smile’; like this is one of those OTP memes! I am loving this series.

Previous book in the Way of the Househusband series

One thought on “ARC Review: The Way of the Househusband, Vol. 2 by Kousuke Oono”