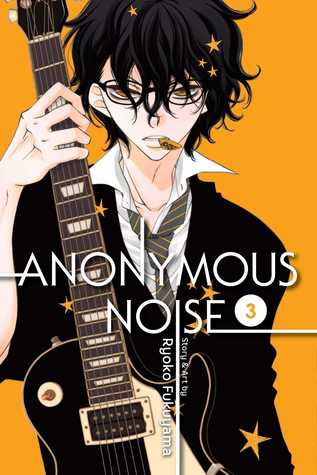 Anonymous Noise, Vol. 3 by Ryōko Fukuyama
My rating: 4 of 5 stars

At long last, Nino makes her TV debut as “Alice,” the new singer for the popular band In No Hurry to Shout. But Momo’s rejection has left her spiraling out of control, and her unconventional performance leaves everyone stunned! What will come of this shocking debut? And what will become of her deepening friendship with Yuzu, when both of them are concealing their true selves?

With Nino and the band In No Hurry making their TV debut, her raw performance leaves people stunned and buzzing. While In No Hurry is making up plans for how best to promote their brand, Momo, in a fit of jealousy, launches his own band which is basically a copycat and with the same album debut date. Look, I can maybe get his guilt over ‘selling out’ (in his terms), but pushing Nino away and then trying to upstage her band doesn’t seem like a great way to honor a childhood friendship. And sure, I wanted the rivalry but NOT LIKE THIS! And poor (or should I say, more likely, how much of an airhead) Nino still wanted to sing for his sake – I hope her character arc is her realizing that she only needs to sing for herself; in fact, I already felt hints of this in her conversation with Miou, who is lamenting over the futility of chasing something.

The romance takes dramatic turns in this installment – while Yuzu is still fretting over letting his feelings be known, Nino is oblivious to it; her eyes are only for Momo. And when she finds him finally (you’d think by now they would have crossed paths considering how often Yuzu and Momo do!) he once again pushes her away. On the flipside, Momo and Yuzu become better friends but then obviously with all the drama about realizing who Momo is kinda burned that one to the ground. Now, both Momo and Yuzu are going to fight over her and man, I want this is to be about the music rivalry but the drama and the angst keep it going, to be honest. Still, I hope the messiness of their relationships doesn’t get old.