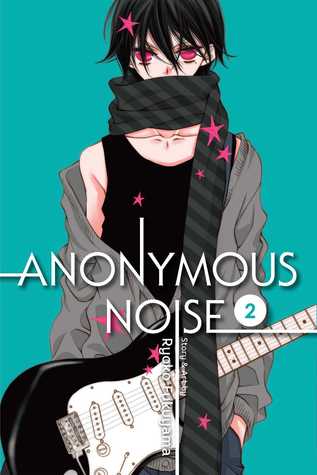 Anonymous Noise, Vol. 2 by Ryōko Fukuyama
My rating: 4 of 5 stars

Yuzu struggles with his feelings for Nino even as his band tries to recruit her. Meanwhile, Nino strives to improve her singing skills in a bid to get Momo’s attention somehow… She soon lands an audition that’s being held by a “Momo Kiryu”—could he be her Momo?

While Nino is still trying to find Momo, she is being recruited by the Yuzu’s band to replace their lead singer. When she sees an audition being judged by a songwriter named Momo Kiryuu, she puts two and two together (Kiryuu is his mother’s maiden name) and jumps on the chance to audition just so that she can finally meet him. Nino, however, is still rough around the edges with her vocal skills, so Miou helps her out (I do hope these girls become besties soon! It would be so nice to not have the jealous friend trope); Yuzu meanwhile is torn about having her in the group – he is in love with her, but she is in love with Momo, and there’s a lot of angst about that, okay, which is just right up my alley. What I also loved in this volume was that we finally get a glimpse into the boys’ lives during those 6 years and what was the reason for their respective reactions to knowing Nino now. I love how the emotions of their love for music is portrayed, and the themes of ‘voices’ and how each affects the others’. Oh, and I am so excited for the new band and their adventures!

One thought on “Review: Anonymous Noise, Vol. 2 by Ryōko Fukuyama”