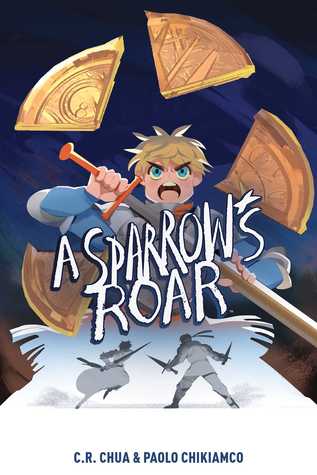 A Knight’s tale about duty, duels, driving your sister crazy…all while trying to save the country from a secret that threatens to tear it apart.

When a seemingly harmless prank goes wrong, knight-in-training Per of Esterpike watches her sister Elena, famed hero and leader of Lions, murdered by a barbarian horde set on wiping Esterpike off the map. Together with Elena’s second-in-command Amelia, Per must impersonate her sister and travel to Unity’s capital to convince the Generals of each city-state to provide aid against the oncoming horde. But as Per moves forward on her quest, she comes upon a conspiracy that might just threaten Unity itself!

A story about a young warrior who has to step into her sister’s big shoes, A Sparrow’s Roar is simplistic, sweet and full of action. The story skips a bit back and forth (I was so glad to have read the synopsis first because the sisters’ design is quite alike), but it tells of Per’s older sister being invited to be one of the four Great Generals that govern the kingdom. When a prank of Per’s leads to her sister being unprepared for an attack, she takes on her name and position to petition them to help her home, Esterpike, from being attacked again. While impersonating her larger-than-life sister is a bit challenging, the bigger difficulty comes in finding out the motives of one of the other Generals. By turns funny, and emotional, the story blends both drama and action into a fulfilling arc. I feel like Per’s feelings could have been explored a bit more, as well as that of Amelia’s (was she Elena’s gf, too, I can’t be sure but there were hints). The vibrant coloring and brilliant storyboard, complement the artwork style well, making it quite engaging to read. And hey, bonus – you get realistic girl warriors who are both buff and feminine!

Received an advance reader copy in exchange for a fair review from BOOM! Box, via Netgalley.