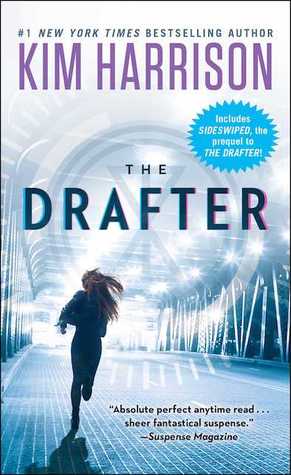 The Drafter by Kim Harrison
My rating: 4 of 5 stars

Double-crossed by the person she loved and betrayed by the covert government organization that trained her to use her body as a weapon, Peri Reed is a renegade on the run. Don’t forgive and never forget has always been Peri’s creed. But her day job makes it difficult: she is a drafter, possessed of a rare, invaluable skill for altering time, yet destined to forget both the history she changed and the history she rewrote. When Peri discovers her name is on a list of corrupt operatives, she realizes that her own life has been manipulated by the agency. Her memory of the previous three years erased, she joins forces with a mysterious rogue soldier in a deadly race to piece together the truth about her fateful final task. Her motto has always been only to kill those who kill her first. But with nothing but intuition to guide her, will she have to break her own rule to survive?

This story about a time travel agent/spy who is unsure of her actions and who is being manipulated by the people around her is a fast-paced thriller that is engaging enough to entertain. Peri Reed is a drafter, who can turn back time and alter events, but cannot remember the old timeline. Every drafter is supported by an anchor, who is trained to remember both timelines. As such, this means that a drafter has to depend on their anchor to guide them through the parts they don’t remember, and in Opti, the drafters are pampered by their anchors and are often their lovers. Peri, who has been marked as a corrupt agent, isn’t sure of her past or the missions she has been on; she can only trust her lover and anchor but when she is betrayed, she is caught up in a corrupt scheme that puts her in between Opti and another organization.

The story goes back and forth for Peri – she takes two steps forward in finding something out or figuring something and then when a draft happens and her memories are altered, she is once again lost. Her training/conditioning has her take the word of her current anchor at face value, but her instincts and her fragmented memories scream at her to look again. The plot has a lot of action, some spectacular twists and loads of intrigue and tension. The only thing is that it keeps going again and again over the same thing because for the most part, it is narrated by Peri. Silas’ PoV yields more insight but has less plot development, so it depends on Peri’s PoV to carry the story forward. Overall, it is a thrilling read but yes, at times, it feels like the repetition could have been less.

Prequel in the Peri Reed Chronicles