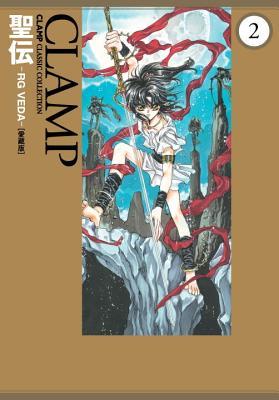 RG Veda Omnibus Volume 2 by CLAMP
My rating: 4 of 5 stars

RG Veda, pronounced Rig Veda, is based on the classic Indian saga of the same name. Ashura has now placed trust in Kujaku, known for many lies, to tell the truth and lead them to the fabled Ice Castle in search of Yasha, magicked away in a cloud of butterflies! But there are many strange fortresses in the realms of the gods, and the Sky Castle also is a place of darkness, shrouded in sorrow by the grief of the Lady Karura for her sister. And even a sanctuary in the clouds is no safe refuge to one hoping for revenge on the usurper of the heavens, Taishakuten…

As Yasha has been taken captive, Ashura and the others try to get to him while being under attack from Vahyu and his men. Kujaku performs Ashura’s ascension with the sword to help him reach Yasha, but it also unveils the ‘other’ Ashura. Even so, our regular Ashura is lamenting over feeling unwanted, about how his mother tried to kill him, but by the end, he finds a purpose in protecting Yasha. Meanwhile, Lady Karura is still in shock and grief, thinking how much she wants revenge against Taishakuten, and how much is she willing to risk her own clan to do so. Queen Kendappa gets a fair share of the PoV in this volume, as she is the one to revive Karura, as well as witness many events happening in Zenmi palace. That general’s daughter doesn’t know who she is messing with, because I feel Kendappa may very well be the fourth General whose identity is secret. Speaking of secret identities, Kujaku is mystery still, and so are his motives. He seems to like Ashura and even more to tease Yasha, but Ryuu is right – his appearances and disappearances are weird. Also another character’s motives slowly being hinted at is Taishakuten himself – who has something mysterious to protect with his tight tyrant fist. This whole volume is filled with a lot of mini-storylines and flashbacks, so we get to know the characters better. I am loving the whole thing, with the emotional arcs, with the sibling angels and everything so far.