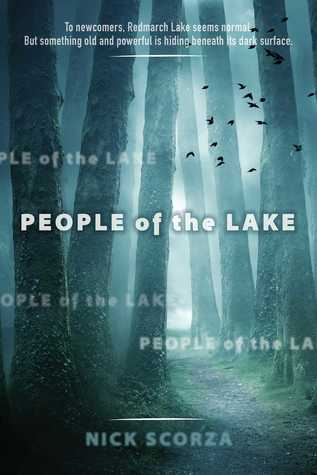 People of the Lake by Nick Scorza
My rating: 4 of 5 stars

Sixteen-year-old Clara Morris is facing an awkward summer with her father in the tiny upstate town of Redmarch Lake. Clara’s relationship with her parents—and with life in general—has been strained since she lost her twin sister, Zoe, when the girls were eight. As a child, her sister had been her whole world—they even shared a secret invented twin language. Clara has managed to rebuild herself as best she can, but she still feels a hole in her life from the absence of her twin, and she suspects she always will.

She soon finds that Redmarch Lake, where her father’s family has lived for generations, is a very unusual place. The townspeople live by odd rules and superstitions. The eerily calm lake the town is named for both fascinates and repels her. The town’s young people are just as odd and unfriendly as their parents. Clara manages to befriend the one boy willing to talk to an outsider, but he disappears during a party in the woods.

The next day, he is found dead in the lake under mysterious circumstances. The townspeople all treat this as a tragic accident. Clara isn’t buying it, but she doesn’t know what to do until she receives a mysterious note hinting at murder—a note written in the language she shared with her twin sister, Zoe.

People of the Lake gave me both spooky vibes and mystery vibes going in – the former from the cover, and the latter from the synopsis and it ends up being both – a mystery wrapped in a horror setting. Clara coming to her father’s hometown for the summer was supposed to be for her looking after him and to get away from her mother’s new boyfriend, but she soon gets involved in the mysterious deaths in the town. While the town is picturesque, the people aren’t welcoming in the least, and Clara initially chalks it up to probably bad experiences with outsiders, but soon a lot of things about the town of Redmarch Lake don’t seem right. The residents are superstitious and paranoid, including her father, and almost no one is ready to discuss the families that started the town, or the bloody legends that surround it. With the help of Hector, another outsider like her, and her father’s research for his book, she starts to find out why weird things happen often in the town and are quickly brushed under the rug.

When it comes to horrors or thrillers, the first thing I look for is atmosphere. This book nails the foreboding town trope very well, with the creepy forest bordering it, the ultra creepy lake near it, and the powerful family talked about in hushed tones. It was summer in the story, but damn it gave me some chilly autumn feels while reading. Clara’s fear and wariness of the forest seems visceral from her voice, and you can feel her frustration with her father and the people of the town. At one point, I was sure she was an unreliable narrator, too, and that just adds to the mystery of the story. Oh, and there are actually two mysteries in the story, which while predictable, are linked in a way I didn’t see coming. The characters seems a bit stiff sometimes, but I don’t know if it was a town thing or a Clara thing. Still, the plot reveals and twists were well-done, and I liked the inclusion of historical elements into the story through excerpts from her father’s research.

Overall, it is an eerie supernatural mystery that feels apt for this season!

Received an advance reader copy in exchange for a fair review from Sky Pony Press, via Edelweiss.