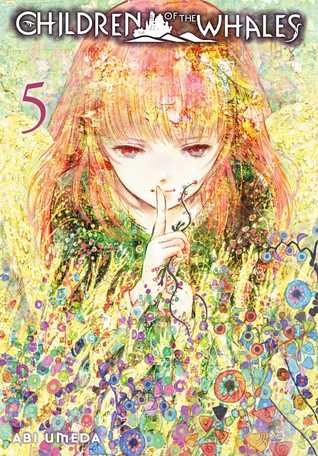 Children of the Whales, Vol. 5 by Abi Umeda
My rating: 5 of 5 stars

The people of the Mud Whale have fought off the forces of the Allied Empire—for now—and their only hope for continued survival is to find an ally from beyond the Sea of Sand. So when the bombastic Captain Rochalízo sails his ship alongside their island, Mayor Suou is ready and eager to befriend the stranger. But even if Rochalízo can offer asylum, they have no way to navigate. That is, until the mysterious Aíma begins unlocking the Mud Whale’s secrets for Chakuro…

With a new player coming on the board in the form of an outside nation who has had no idea about the Mud Whale or even that it is a penal colony, the residents of Falaina are finally coming in contact with the wider world. The leader of the ship, a nobleman named Rochalizo finds them on the very day that they were all having a bathing festival, leading him to believe they are a nudist tribe or a savage race. While a younger son of a duke with a itch to prove himself doesn’t make the best of stable allies, Suou and the others decide to put some (not all mind you) trust in them, and see if it helps them against the Empire. There are some initial clashes, what with Rochalizo wanting to make them his subjects, thinking them to be easy prey, and with some culture shocks (Kuchiba trying so hard to be diplomatic and polite and utterly failing at it was a hoot!), but soon they all are witness to the ‘next step’ that Olivinis told Chakuro about.

Meanwhile, Orca neatly sidesteps the consequences of his failed attempt to destroy Falaina, while also provoking a stronger sentiment against them, specifically Ouni, who they believe is one of the Daimones. We get a bit of backstory on the difference between the Marked and the Unmarked and the treatment of these two people across the two different countries. But the biggest bombshell – the mystery that was lurking just under our noses – was dropped, about the nature of Nous Falaina. To be honest, I feel stupid like Chakuro to not have put the pieces fully together earlier – I was only like, why did they not need to feed it emotions like the apatheia ships? but damn that ending was a nice shock to me.

In short, a volume filled with more threads and reveals, and hinting at bigger conflicts to come.

One thought on “ARC Review: Children of the Whales, Vol. 5 by Abi Umeda”