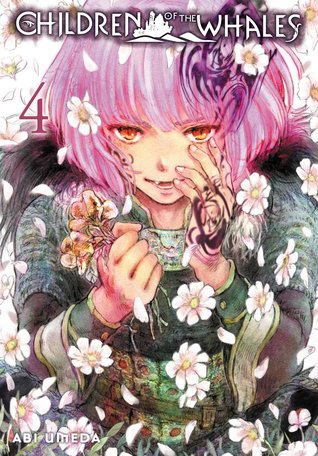 Children of the Whales, Vol. 4 by Abi Umeda
My rating: 4 of 5 stars

The battle for the Mud Whale has become a deadly rout as the Marked fight to protect their home and their comrades from the invading apátheia soldiers. Meanwhile, Chakuro and the rest of the boarding party have made it safely onto the imperial battleship Skyros, but their mission turns bloody when they reach the thymia-shielded chamber at the heart of the ship. How will they destroy the enemy Nous and save the Mud Whale without access to their power?

With the previous volume leaving us on a tense moment where the enter the Belly on Skyros only to be attacked by apatheia, it had our main characters in a difficult situation. They were outnumbered, and their main weapon, thymia, was ineffective in this place. Meanwhile on the Falaina, Liontari is battling with the Commander of the Vigilantes, and Suou is trying to appeal to the better nature of the former. Ouni’s violent rampage during the previous attack has already spread as a legend among the apatheia soldiers, with them calling him Daimanas, and him representing everything they were taught to fear about the Falaina people. In a surprise, however, he turns the tide (fueling more legends at this point, I suppose) of the fight, getting them the victory they needed.

However, it is a bittersweet victory, with so much life lost once again. The cover truly represents how the people of the Mud Whale felt – like their idyllic paradise was destroyed by the soldiers’ violence. The artwork is beautiful and awe-inspiring as always in its scope. Once again, there are various sentiments swirling – grief, of course, which they always cannot suppress by clasping hands, vengeance, which they will need for another defense, and a horror from the violence committed. And with the world opening up to them now, I am a bit nervous about what other dangers might be there for them on the sea of sand.