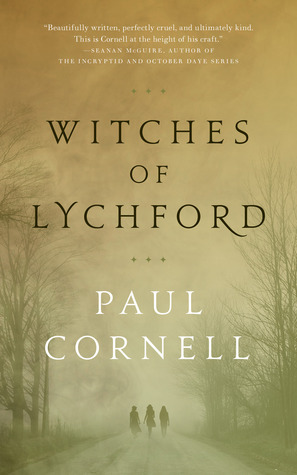 Witches of Lychford by Paul Cornell
My rating: 4 of 5 stars

The villagers in the sleepy hamlet of Lychford are divided. A supermarket wants to build a major branch on their border. Some welcome the employment opportunities, while some object to the modernization of the local environment.

Judith Mawson (local crank) knows the truth — that Lychford lies on the boundary between two worlds, and that the destruction of the border will open wide the gateways to malevolent beings beyond imagination.

But if she is to have her voice heard, she’s going to need the assistance of some unlikely allies…

Note: Not YA, but suitable as a crossover title.

When I read this book for the first time, I confess I was sort of sick that day and was dozing in and off during some scenes, which is what led me to give it a 3 star rating, as I really wasn’t getting much through my head. On a second read this year (because somehow even then this book stuck with me, and I wanted to read the series further) I was much more ‘present’ and well, it was a better read this time around, and so I amended my rating. Witches of Lychford takes a fae-like story and puts it against the backdrop of a small town divided over a political issue, and is primarily focused on three women who become an unlikely team as they wage a battle in the shadows.

Judith, the local witch, is known to be prickly and no one heeds her warning about creatures that are trying to break the barriers into this world through the town’s changing landscape. Meanwhile, Lizzie, the new vicar fresh from grieving the loss of her fiance, and Autumn, the owner of a Wicca shop in the village rebuilding her life after what she thinks is a mental breakdown, were friends who drifted away and are now recruited by Judith in helping bring Sovo, a supermarket chain, down. The story surprisingly packs a lot of plot into its short length, but the same cannot be said for world-building which had been one of the reasons I was not invested in this book in the first read. It leaves a lot of blanks you have to fill in yourself, and still, on the second read, I don’t entirely understand the magic or the creatures of the book, but I am willing to go on to the next book to find out more.

Additionally, the audiobook narrator does a great job with it, so I would recommend listening to this book (just don’t do it if you are about to doze off, or else you might miss sentences like me lol).