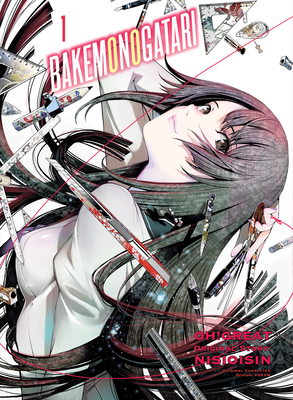 Bakemonogatari, Volume 1 by NisiOisiN
My rating: 4 of 5 stars

One day, high-school student Koyomi Araragi catches a girl named Hitagi Senjougahara when she trips. But — much to his surprise — she doesn’t weigh anything. At all. She says an encounter with a so-called “crab” took away all her weight…

Monsters have been here since the beginning.
Always.
Everywhere.

A unique take on the concept of monsters from folklore in the modern world, Bakemonogatari boasts a dramatic storyline and awesome artwork. Like, the first thing to catch your eye about this manga would be the artwork style – it is evocative, and the storyboard is impressive. It plays with angles and shadows to give the story that extra punch of mystique, which elevates the plot to a more intriguing level. The story is about these high school teens who are bound to monsters, with Araragi as the protagonist who helps out his classmate whose weight has been taken by a monster. Since he himself has had an encounter with a monster, he takes her to the person who helped him and they all perform an exorcism of sorts, which then reveals the nature of the bond.

I will add, though, that the brilliance of the plotline is undercut by the fact that this manga also indulges fanservice – like, are you really asking me to believe that this guy’s hands just lands on her private parts not once, but twice? There are a couple of other instances where unnecessarily panels are devoted to make suggestive scenes. Also, I never understood how a girl who finds it difficult to even change clothes because it is much heavier for her, carries around practically an entire stationery shop of sharp objects with her? Like, I get it – the scenes with her displaying that array are pretty cool, and detailed well, but it is just a glaring plot hole, or an excuse to have him help her dress, so either way I am calling bull.

Received an advance reader copy in exchange for a fair review from Vertical Comics, via Netgalley.