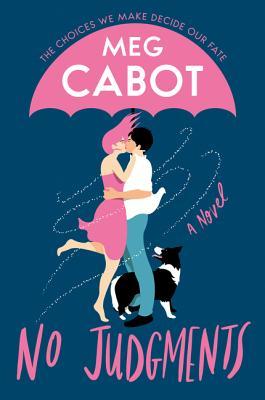 No Judgments by Meg Cabot
My rating: 3 of 5 stars

When a massive hurricane severs all power and cell service to Little Bridge Island—as well as its connection to the mainland—twenty-five-year-old Bree Beckham isn’t worried . . . at first. She’s already escaped one storm—her emotionally abusive ex—so a hurricane seems like it will be a piece of cake.

But animal-loving Bree does become alarmed when she realizes how many islanders have been cut off from their beloved pets. Now it’s up to her to save as many of Little Bridge’s cats and dogs as she can . . . but to do so, she’s going to need help—help she has no choice but to accept from her boss’s sexy nephew, Drew Hartwell, the Mermaid Café’s most notorious heartbreaker.

But when Bree starts falling for Drew, just as Little Bridge’s power is restored and her penitent ex shows up, she has to ask herself if her island fling was only a result of the stormy weather, or if it could last during clear skies too.

No Judgments is a romance set during and in the aftermath of a Category 5 Hurricane striking a small island, and is told through the perspective of Sabrina ‘Bree’ Beckham, a woman who came to the island a few months ago to escape her former life and go on a mancation. Obviously, it is the rule of the romancelandia that if the heroine swears off romance and men, that’s when she finds one that is irresistible to her. Bree doesn’t want to fall for Drew, who had a playboy reputation and is so totally ‘not her type’, but considering him being an animal lover and all she is, well, in deep trouble with her resolve.

The main draw of the book for me was the author, of course, and while that’s not always a bad thing, I was kinda bored with the romance in this book. I couldn’t get really that invested in the characters, and the relationship develops too fast, much like the short story Bridal Boot Camp that preceded this book (I must also mention that I was sad that only Ryan makes an appearance in this book? I thought Rob was Bree’s friend???). Aside from the romance – the plot, however, is interesting enough and Bree finally standing up to the people who hurt her was nicely done. Oh, and the best thing this book has are all the various animals – I loved Gary so much (seriously that cat is such a great character), and Socks, too!

Overall, a quick and entertaining enough read but wouldn’t recommend it for the romance.

Received an advance reader copy in exchange for a fair review from William Morrow Books, via Edelweiss.

2 thoughts on “ARC Review: No Judgments by Meg Cabot”