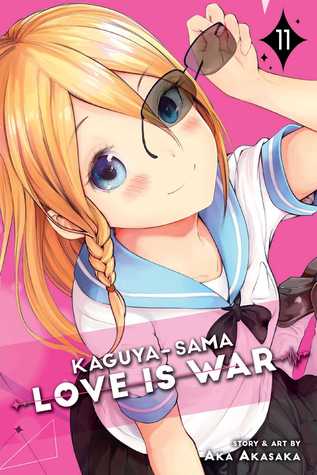 Two high school geniuses scheme to get the other to confess their love first.

Will Miyuki and Kaguya help Yu escape the aggro of all his female classmates, let alone win the favor of the girl he’s crushing on? Then, it’s Miyuki who is teaching Chika a new skill for a change. Kaguya faces the temptations and pitfalls of her new smartphone and social media. Hayasaka takes on yet another secret identity. And the student council’s parents cross paths at school conferences to decide where their children will attend college.

When you make plans, the gods laugh.

This was an especially hilarious volume, with these disaster characters causing more mayhem. First, there’s a whole thing about read notifications – Kaguya, smartphone newbie that she is, doesn’t know about read notifications on Line, which causes some hilarious speculation on Shirogane’s part, as he tries to confirm if she was, indeed, staring at the chat screen for 2 hours, instead of replying (she was). Hayasaka comes to her rescue that time. Later on a sleepover with Chika (during which Hayasaka cross-dresses as a butler) there’s a whole misunderstanding generated that leads to a confusing meeting when Shirogane wants to rap out his feelings. And yes, it was as much of a laugh as all of Shirogane’s attempts to learn a new skill with Chika’s help! I honestly love this duo!

Another duo that I love is Ishigami and Kaguya, as the former tries to live up to the latter’s expectations of him in academic success – which, well, let’s just say, gave me some feels. He and Ino are also a nice enemies-to-friends duo, and Shirogane tries to make them get along with some ludicrous exercises! And Maki coming to Shirogane and Ishigami for friendship/love advice was the cherry on the cake, especially when she cheekily tells Kaguya about her new male friends! There’s also a whole meta discussion about ‘moe’ by Chika which was truly this manga taking the opportunity to drag itself. And we finally find out Kashiwagi’s boyfriend’s name!

Overall, this one is just a bundle of laughs!