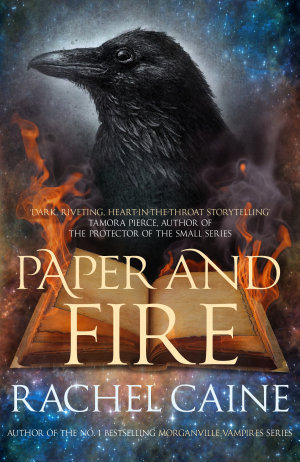 Paper and Fire by Rachel Caine
My rating: 5 of 5 stars

With an iron fist, The Great Library controls the knowledge of the world, ruthlessly stamping out all rebellion, forbidding the personal ownership of books in the name of the greater good.

Jess Brightwell has survived his introduction to the sinister, seductive world of the Library, but serving in its army is nothing like he envisioned. His life and the lives of those he cares for have been altered forever. His best friend is lost, and Morgan, the girl he loves, is locked away in the Iron Tower and doomed to a life apart.

Embarking on a mission to save one of their own, Jess and his band of allies make one wrong move and suddenly find themselves hunted by the Library’s deadly automata and forced to flee Alexandria, all the way to London.

But Jess’s home isn’t safe anymore. The Welsh army is coming, London is burning, and soon, Jess must choose between his friends, his family, or the Library willing to sacrifice anything and anyone in the search for ultimate control…

Paper and Fire picks up many months after the ending of Ink and Bone, with Jess quietly investigating library secrets while being part of the Garda, and the others working in their respective positions. As they get close to a particular secret, something that gives them all a cause to defect from the Great Library, they are also being watched by the Artifex who, in conjunction with the Archivist is itching to get rid of them as well as Wolfe and Santi. But leaving the Library is not easy, and even with Jess armed with the knowledge of how to handle the automata, they have a complicated path ahead. That coupled with the fact that allies are rare, and they all are stuck between the complicated politics of the Artifex and the Obscurist has this as a tenuous group endeavour.

The plot of this book is filled with action, and it keeps up a good pace, and leaves you on tenterhooks as to what might happen next. Betrayals are close by, and yet, Jess and his friends have to rely on each other or at least trust enough to get through; Jess especially compares his own family to the one he’s found. It is also quite emotional as a book – with the well-worn paths of the relationships established in the first book, it follows through on those to explore them. Jess feels Morgan out of reach, but he’s not completely aware of how much she herself is losing. Wolfe’s complicated relationship with his mother, the Obscurist, as well as the peek into the Iron Tower was explored well. Then there was the shocking climactic scene of the hidden Archive which, let me tell you, I felt the things Jess was feeling; it was such a profound sense of loss. And then the cliffhanger sealed the deal; I was amazed by this book overall.

2 thoughts on “Review: Paper and Fire by Rachel Caine”