Welcome to my stop on the Tour of Rage & Sorrow! I am so excited to be a part of it, and to share the things I have in store! First, there’s a review, then some of my favorite (non-spolier) quotes, and finally, an artwork of Esmae Rey, made by me! 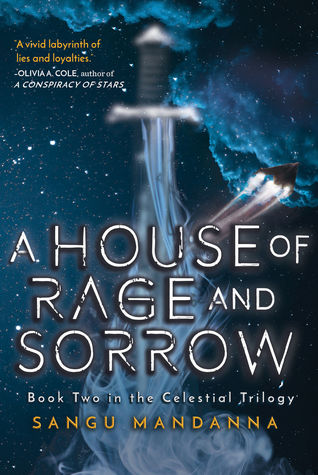 One kingdom. One crown. One family.

“Maybe it’s time the great House of Rey came to an end. After all, what are we now? Just a house of rage and sorrow.”

Esmae once wanted nothing more than to help her golden brother win the crown of Kali but that dream died with her best friend. Alexi broke her heart, and she vowed to destroy him for it. And with her sentient warship Titania beside her, how can she possibly fail?

As gods, beasts, and kingdoms choose sides, Alexi seeks out a weapon more devastating than even Titania. Past lives threaten the present. Old enemies claim their due. And Esmae cannot outrun the ghosts and the questions that haunt her. What really happened to her father? What was the third boon her mother asked of Amba? For in the shadows, lurking in wait, are secrets that will swallow her whole.

The House of Rey is at war. And the entire galaxy will bleed before the end.

After being betrayed by Alexi when he killed Rama thinking it to be her, Esmae had declared war on her brother and his allies. As the two twins circle around each other, testing and weakening each other’s defenses, there are deceptions, calculated risks and old secrets that keep coming up. While this is mainly narrated by Esmae, the addition of Titania’s PoV serves to give us a more rounded view of the events beyond Esmae’s knowledge. As the gods and the mortals prepare for war, the question it is whether it is necessary and how much will be paid for it.

The book’s name certainly alludes to the divide in the House of Rey, and the many curses, fights and grievances that led to the two twins in opposition to one another, but it also speaks more to Esmae’s emotions in this book. She is made of sorrow, for the grief from Rama’s death and everything she never had, and rage, because it was her family that took those things from her; you can feel it dripping from this book, so strong are the emotions it evokes. As she launches her campaign against the golden son Alexi, she vows to destroy him in every way she possibly can. With the two matched yet quite differing in their strategy, they each try to weaken the other – Esmae’s biggest asset Titania is a thorn that Alexi and Kirrin are willing to take off the board at any cost, and Alexi’s reputation as a glorious warrior and his numerous allies is what Esmae is after.

Another thing this book’s plot stands on is the many secrets these characters are keeping. Even Titania is keeping things from Esmae, and though they were with the intention to protect from the pain of those, I can’t deny that I was a bit frustrated with some of the characters. Like, I get it, but I don’t like it. And then there are the gods who have created and abetted this mess. Honestly, I was ready to wring Kirrin’s neck at some points. But yeah, the most anger I felt was towards Kyra, because gosh, how can one person do so much damage?! The book also has some amazing twists at which I was screaming, because well it kept my nerves singing at various points in the book; building the suspense for the twist is something these books do well.

Finally, all I want to say is that this was an amazing sequel, and an emotionally-charged book that has you feeling all the feels.

Is it diverse? OwnVoices retelling of Indian mythology, with a cast of PoC characters; sapphic side couple, and other queer characters

Previous book in The Celestial Trilogy

Received an advance reader copy in exchange for a fair review from Sky Pony Press, via Edelweiss.

Sangu Mandanna was four years old when an elephant chased her down a forest road and she decided to write her first story about it. Seventeen years and many, many manuscripts later, she signed her first book deal. Sangu now lives in Norwich, a city in the east of England, with her husband and kids.

“Every battle is a scream. Every strategy is a scream. I hear myself inside my own head. I never, ever stop screaming. Every single breath I take is a scream, building and building until it one day it will reach such ruin that my brother will shatter into a thousand pieces.”

“Courage, strength, and honor. It’s what we respect above all else, but respect for the warrior way is not the same as respect for war itself.”

“Girls are too easily broken. Are we? Or is it just that more people want to break us?”

“Things have really gotten out of hand if a sentient spaceship has a busier social schedule than I do.”

“You’re a star hurtling at a thousand miles an hour and it’s impossible to hold on to you.” I swallow. “Try.”

Aaah I was so excited to make this. It is sorta from the opening scene of the book, and I kinda wanted to show Esmae as the warrior she is, but also the emotional turmoil in her. Her face alone took me HOURS (zoom in to see the details!)!! But I am so happy with the results, also because I sort of been in an art block and rendering her has me feeling a bit more confident again.

One thought on “Blog Tour & Review: A House of Rage & Sorrow by Sangu Mandanna”