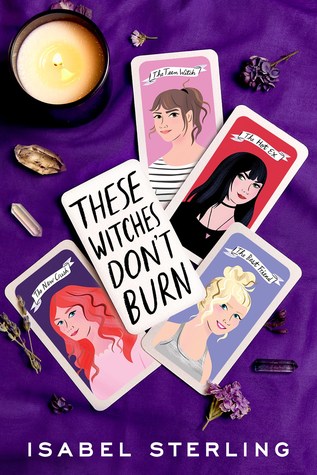 These Witches Don’t Burn by Isabel Sterling
My rating: 4 of 5 stars

Hannah’s a witch, but not the kind you’re thinking of. She’s the real deal, an Elemental with the power to control fire, earth, water, and air. But even though she lives in Salem, Massachusetts, her magic is a secret she has to keep to herself. If she’s ever caught using it in front of a Reg (read: non-witch), she could lose it. For good. So, Hannah spends most of her time avoiding her ex-girlfriend (and fellow Elemental Witch) Veronica, hanging out with her best friend, and working at the Fly By Night Cauldron selling candles and crystals to tourists, goths, and local Wiccans.

But dealing with her ex is the least of Hannah’s concerns when a terrifying blood ritual interrupts the end-of-school-year bonfire. Evidence of dark magic begins to appear all over Salem, and Hannah’s sure it’s the work of a deadly Blood Witch. The issue is, her coven is less than convinced, forcing Hannah to team up with the last person she wants to see: Veronica.

While the pair attempt to smoke out the Blood Witch at a house party, Hannah meets Morgan, a cute new ballerina in town. But trying to date amid a supernatural crisis is easier said than done, and Hannah will have to test the limits of her power if she’s going to save her coven and get the girl, especially when the attacks on Salem’s witches become deadlier by the day.

Isabel Sterling’s delightful, suspenseful debut is equal parts sweet romance and thrilling mystery. With everything she loves on the line, Hannah must confront this murderous villain before her coven–and any chance she has with the new girl–is destroyed.

These Witches Don’t Burn brings a fresh take on Salem witches, and combining it with a mystery, makes for an interesting plotline. Hannah is an Elemental witch, the only kind of witches who are allowed to live in Salem, albeit in hiding, and when evidence of new rituals show up, she at first suspects another type of witch, the Blood Witches, to be responsible. When a house fire almost has her powers exposed, she has to keep laying low, while also trying to investigate who is targeting her. However, as the danger ramps up, another of the witches’ old fears come to life.

In this Salem, Hannah and her family are part of a coven of Elemental witches, which means they are also her community. Her ex-girlfriend, Veronica, is also another Elemental, and her only friend who she can discuss witch stuff with. So, initially she has to count on her help to investigate, but with Veronica pushing for a reconciliation, and Hannah starting to be interested in the new girl in town, Morgan, things are pretty dramatic on the love front. As for her other friend, Gemma, she can’t say much to her, but Benton is helping her look into the fire. However, with the number of new people in town adding up, her suspect pool grows and so muddies the waters for various incidents. I won’t divulge much about the mystery, but it is done quite well, with clues placed at just the right places to be seemingly innocuous but also red herrings at some occasions. Towards the end, the story really builds on the tensions and mystery that was fed throughout the book, leading us to threads that up the stakes for the next book.

There’s, however, also the fact that the book basically drops us in the middle of something, because for the first couple of chapters I had to go and check that this was indeed the first book in the series. Hannah and Veronica keep referring to an incident in New York that is the cause of their initial fear and suspicion, an incident that is pieced together over most of the book. That plot thread actually was pretty anti-climactic because it is told to us, not shown to us, so the characters’ fears feel distant compared to the current danger. The romance is pretty cute, but yeah, it also took us away from the mystery at times, and at one point, I was like – why are you having a date in an isolated park when your life is in danger?! Also I didn’t really get THAT character’s motivation to get Hannah into their sights because if they were looking for a particular target, she didn’t fit their profile.

Finally, I read this as an audiobook and was enjoying the narrator, of course, but was especially delighted when I recognized the voice as that of Sally Grissom from the ars Paradoxica podcast. Dimercurio does an amazing job with emoting Hannah, and bringing out the other female character voices, though the male voices didn’t always land well. Still, it was an enjoyable read, and I am looking forward, eagerly, to the next book.

Is it diverse? main character is lesbian and has a bisexual love interest, secondary sapphic characters; secondary trans boy character