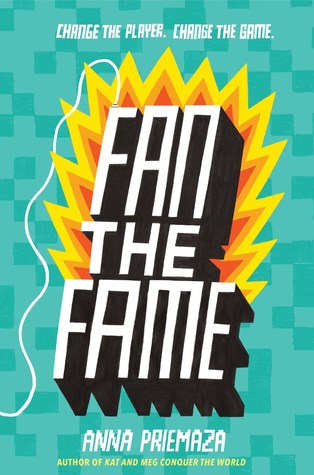 Fan the Fame by Anna Priemaza
My rating: 3.5 of 5 stars

Equal parts Rainbow Rowell’s Fangirl and Jennifer Mathieu’s Moxie, this fiercely crafted, feminist YA novel takes on fandom, accountability, and doing the right thing. Even when it hurts.

Lainey wouldn’t mind lugging a camera around a video game convention for her brother, aka YouTube superstar Codemeister, except for one big problem. He’s funny and charming online, but behind closed doors, Cody is a sexist jerk.

SamTheBrave came to this year’s con with one mission: meeting Codemeister—because getting his idol’s attention could be the big break Sam needs.

ShadowWillow is already a successful streamer. But when her fans start shipping her with Code, Shadow concocts a plan to turn the rumors to her advantage.

The three teens’ paths collide when Lainey records one of Cody’s hateful rants on video. Because she’s determined to spill the truth to her brother’s fans—even if that means putting Sam and Shadow in the crosshairs.

Told through three relatable voices and arriving on the heels of the author’s widely praised debut novel, Kat and Meg Conquer the World, this sophomore novel is a nuanced and timely story about followers, fame, and fighting for what’s right.

Books based on fandom have been around for some time, and this one sort of has those themes, but the focus is more on YouTubers. As we have seen quite enough recently with YouTubers being called out for their problematic behaviour, or open support of bigotry, this novel strives to talk about that aspect of fandom. In the book, there are three perspectives – two, ShadowWillow and SamTheBrave are YouTubers (one big and one fledgling, respectively), who have their own streaming and YouTube channels, while the third, Lainey is the sister of a big name YouTuber, Cody. I initially thought the story would be about them teaming up to take down Cody, but it is more about how their paths cross during a convention for a popular game.

Now, the crux of Lainey’s arc in the book is to ‘fix’ her brother, who is *checks notes* a misogynistic douche. She feels like he might or may already have crossed some lines, and if afraid he will be a predator if left unchecked. She hates his persona of being a douchebro and thinks he can be corrected, but soon realizes that maybe he will need to fall to pick up the pieces and reshape the mosaic of his life, or whatever. Shadow has been invited by Cody to join the convention, and her recent spike of popularity is because of his fans shipping her with him. While she hates the inherent sexism in the gaming fandom, she hopes to capitalize on it and find some long-lasting followers for her own brand, and is looking to see if her connection to Cody leads to something worthwhile. Instead she starts liking this other YouTuber in his group, but with considerations for her channel and a deadline looming, she decides to make the best available choices for her. Sam is a fat teen with skin-picking disorder and who hopes to impress Cody with his channel and find a popular voice to promote him, but meeting his hero is slightly less impressive than he imagined.

The best arcs of this story were Sam and Shadow, while Lainey’s had a lot to be desired. Sam’s path to making his own way, his realization that fandoms don’t always be supportive, but you can still find your community, however small or big it is, was quite well done. Similarly, the complicated set of circumstances in Shadow’s story lead to a character who is sympathetic, while not good in the traditional sense. You’d think the natural progression of her arc would be to reject the system and rebel against it, but you also see how she makes it work for herself. Whether she uses her position to affect good change in the future is an open-ended question. Now, Lainey’s part of the story circles around the same things – fixing her brother’s behavior. She is a socially conscious teen but can be a bit preachy about it; she is learning how and where to influence change, and she is being helped by this adorable teddy bear of a character, Legs, who has his own stuff to deal with. I would say, though, that while their actions eventually seem quite passive, it is realistic in how it would work in the world.

Finally, I have to address this one thing. For a book which frequently points out the white-male-ness of the gaming community and the unequal representation in fandom, which prioritizes white male content creators above all, this book itself doesn’t make much of an effort for inclusion. There’s only one neurotypical character, and a couple of secondary queer characters and one non-white character who don’t even make much of an impact in the storyline. There’s literally this line in the book:

It feels isolating, sometimes, to be a girl gamer in a world where the big names—PewDiePie, Markiplier, even second tier big names like Codemeister and the rest of his team—are almost all guys; I can’t imagine how much harder it must be to be a person of color on top of that.

and I can only side-eye it, because lol this book itself didn’t make an effort to have a major WoC character!

Yes, most major creators are white, and this book’s primary arc was around major characters, but then maybe Sam could’ve been non-white? There’s was no reason for him to be German-origin, even though his is the OV rep?

Overall, I would say that while the book does explore the YouTuber section of fandom spaces and call out for inclusivity in them, it itself could have made more of an effort.

Is it diverse? neuroatypical (skin-picking disorder; ownvoices) and fat character

One thought on “ARC Review: Fan the Fame by Anna Priemaza”