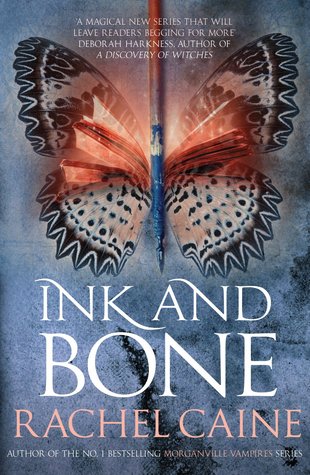 Ink and Bone by Rachel Caine
My rating: 4.5 of 5 stars

In 48 AD, a fire set by the troops of Julius Caesar destroyed much of the Great Library of Alexandria. It was the first of several disasters that resulted in the destruction of the accumulated knowledge of the ancient world. But what if the fire had been stopped? What would the Library have become?

Fast forward: the Great Library is now a separate country, protected by its own standing army. It has grown into a vast power, with unquestioned and unrivalled supremacy. Jess Brightwell, seventeen and very smart, with a gift for mechanical engineering, has been sent into the Great Library as a spy for his criminal family.

Ink and Bone brings a fantastically constructed dystopia with an alternate history in which the Great Library of Alexandria wasn’t destroyed, and instead grew powerful through the use of alchemy. In this world, the Library is its own independent nation, and is powerful enough to control the distribution of knowledge around the world, so much so that they basically can control other countries. They hold all ‘originals’ of books and decide which books can be in circulation. The protagonist, Jess is the son of a book smuggler in London, whose father sends him to join the Library because of his passion for books and because it might benefit the family trade. The first half of the book is about Jess’ training in Alexandria, while the second half is about the first (and deadly) mission he and his fellow postulants have to undertake as a test.

The world of this book is authoritarian, with the Library determined on keeping a tight grip on knowledge. They have only allowed alchemical progress which they control through their enslaved alchemists called Obscurists, and though the printing press has been invented multiple times through history it has always been suppressed due to the threat it presents. Jess enters the Library’s training along with several other teens from various parts of the world, and they are all competing for the six spots that their proctor, Scholar Wolfe has promised to intake. Wolfe is a hard taskmaster and ruthless proctor, but he shows his kinder side in the second half, as he leads them all through a warzone along with High Garda captain Santi. He himself has had a complicated history with the Library, which affects how they all fare in the second half.

The first half being training, most of it also serves to establish the world of the Great Library. It has its petty rivalries, and everything but they all become closer in the second half as they go through some horrible situations. Some of them, like Jess, are hiding secrets and are wary, and some, like Thomas have an idealistic view of the Library. Even so, there are a lot of things that shock even the wary ones, as they see the reality of how the Library enforces its will on the world. They also see how the library prioritizes knowledge over life in action, with them passing through warzones under the flag on neutrality but not entirely safe from the violence. It is tense, and bonds are forged in the stressful situations, and there’s a lot of relationship development in subtext and powerful scenes. I also liked the casual diversity in the book – with the students from different nations, and also how an older queer couple was presented.

The world-building was constructed enough but it still leaves some questions as to how much of this alternate history matches ours. Like, there is mention of Jewish persecution but we do not know whether the World Wars happened. Also, the nations are different – in fact, the war is between England and Wales in the book. Austria is supposedly wiped off the face of the Earth, and France is a rebel country. The technology is in-between – the codex reminds me of cellular devices, and the blanks that they use to read copies of the originals sound like e-readers, but then the alchemical processes can transport things and people across distances, too. The hierarchy of the Great Library wasn’t exactly clear, either and it took me quite some time to realize which Magnus is which. The addition of the Ephemera was a nice touch, though – it gave us enough background information as well as other plot advancements that couldn’t be see through Jess’ eyes.

Overall, it is an interesting world, with a set of brilliant characters to root for, and an engaging plot.

3 thoughts on “Review: Ink and Bone by Rachel Caine”