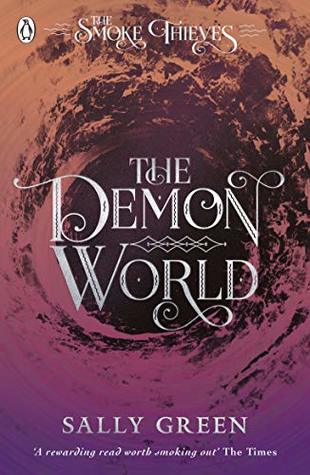 The Demon World by Sally Green
My rating: 3 of 5 stars

After narrowly escaping the fall of Rossarb, Princess Catherine leads a rag-tag group of survivors into the barren wasteland of the Northern Plateau.

With the Brigantine army snapping at their heels, Edyon and Ambrose become separated from the group, while demon hunter Tash leads Catherine and March to an unlikely refuge – the hidden tunnels of the demon world itself. They soon find that the tunnels hold their own dangers and, while Tash travels deeper, hoping to learn more about their mysterious inhabitants, Catherine and March must return to the surface to resume the war.

But the world above is in turmoil. King Aloysius’s army has captured the Pitorian prince, Tzsayn, and is poised to overrun the whole country. To have any hope of challenging her father’s tyranny, Catherine needs to form her own army, but when danger lurks at every turn, how can she tell an ally from an enemy? What Tash discovers in the demon tunnels could change everything, but if the message doesn’t reach Catherine in time, the war might already be lost . . .

With our group of main characters narrowly escaping the siege at the northern stronghold, they escape into the Northern Plains to outrun their Brigantine pursuers. Necessity takes them into the demon tunnels, where the others, too, discover how unusual it is. Tash herself gets a chance to explore more of it, and comes away with more questions that she wants to try to answer. As their paths diverge once again, Catherine and Ambrose head towards the Pitorian armies, Edyon and March go over to make way to Caldoria with a letter from Tzasyn in hand and Tash remains in the demon world to solve some mysteries.

This book is marginally better than the previous in that the pacing is a bit better, but it still suffers from the problem of not realizing its plot arcs well. Catherine, after returning to the Pitorians, takes control of the monarchy by claiming to be Tzasyn’s wife and has to show strength. But as the strain of ruling starts taking its toll on her, and her life also becomes threatened, she starts depending on the demon smoke to feel invincible, but if this is going to make a difference in her arc going forward is still up in the air. And Ambrose, who I thought to be boring in the previous book, just becomes annoying in this one; he resents Catherine a bit for what she has to do, and I get that he’s feeling like he’s being swept aside for power, but dude, her life is at stake here. Edyon’s and March’s romance progresses but March’s lie still hangs like a sword above it. That was perhaps the only arc that was realized in this book. The ending was pretty much abrupt for most of the other characters, with Tash maybe on a cliffhanger, but Catherine and Ambrose like uh, what?

Received an advance reader copy in exchange for a fair review from Penguin, via Netgalley.