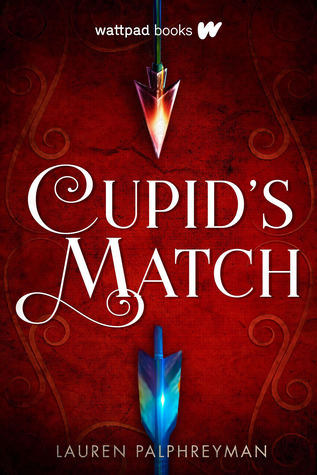 Cupid’s Match by Lauren Palphreyman
My rating: 3 of 5 stars

Lila Black doesn’t believe in matchmaking, let alone soul mates. So then why is she constantly being hassled by the Cupids Matchmaking Service? But this gilded, cherub-bedecked dating agency isn’t exactly what it seems . . . and it’s about to turn Lila’s entire world upside down.

It turns out that Cupids Matchmaking is the real deal. As in, it’s run by actual cupids―who don’t look at all like they do in the paintings―and they have a serious problem with Lila’s “match.” Because this guy shouldn’t be in the system. He shouldn’t have a match. And while he’s irresistibly hot, he’s also incredibly dangerous. Because Lila’s true love match is Cupid. The original bad boy of love. And he wants her.

Now Lila’s once-normal teenaged world has exploded into a mythological nightmare overrun by crime-lord sirens, wrathful cupid hit men, magic arrows that cause no end of trouble, and a mischievous, not-so-angelic love god she can’t seem to stop herself from falling for . . .

I read a couple of cupid-themed releases this year, both having modern day cupids working as matchmakers, so I was just looking to see how this book took a spin on the theme. And sorry to say, but I honestly couldn’t take it seriously; it honestly would have worked better as a satirical comedy. The first half is so cliche I had to stop myself from too many eye rolls. So, there’s our girl Lila – she is being contacted by the mysterious Matchmaking service, out of the blue, because her name shows up as a match; she goes to tell them ‘no thanks I already have a boyfriend’ but gets caught up in the drama because she has been matched with the original Cupid, who has been exiled from the organization.

Then, everyone and everyone’s mother (ha!) is after her because they are preventing the match from happening, as in him falling in love with her and vice versa. So simple thing, keep her away from him, right? Nope, they do the exact opposite for most of the book. Cal, Cupid’s brother, assigns himself to protect Lila from danger and from his brother’s gaze, but fails miserably when he tries to distract him with a girl from the same school; like couldn’t he have gone to the opposite side of the world if his goal was to lay false leads??? The logic in this book was astoundingly irrational for the most part. Cupid is, for some reason, a bad boy? There’s no mention of Psyche (I honestly thought Lila was supposed to be the modern equivalent of her)? Also, why the mixing of Greek and Roman names? Instead of Cupid staying away from her, he keeps hovering around like a gnat. There’s only one character I was even semi-invested in, and that was Cal.

The second half of the book, though, saved it somewhat. It led us away from the cliche high school drama, gave us an interesting plot, some mystery and tension; the romance was still aggravatingly going cross-purpose with the plot, though. A big failing of the story is the fact that though Cupid is the main love interest, there is nothing appealing about him. He could have fit in with his cliches maybe a decade ago (with his Patch vibes), but now, with most expectations of male love interests being soft and kind bois, he just sticks out like a sore thumb. Cal, instead, makes a better love interest, despite him being a stoic character.

At the end, all I can say, if you are determined to finish the book, things do get better after that rough and cringe-y first half.

Received an advance reader copy in exchange for a fair review from Wattpad Books, via Edelweiss.