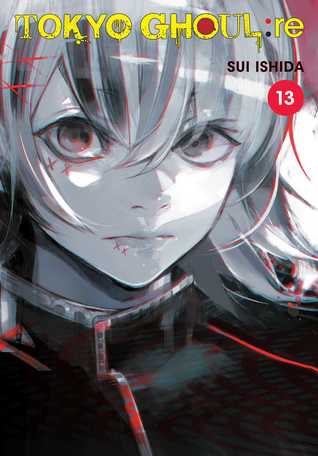 Furuta has finally gone too far in his mad power grab at the CCG. Disgusted at his abuse of countermeasure law, Urie and a group of investigators decide to take him down. When they confront him, it becomes clear that Furuta is himself a Ghoul. Overthrown and fleeing the threat of eradication, Furuta takes out his rage on the Goat stronghold. And in the ensuing carnage, Kaneki is forced to make a horrible, fateful decision…

This volume plays a game of mystery with us, as the attack on the GOAT safe haven commences. There is a handy guide mid-way through the book about who is where and doing what, but there’s still like a lot of characters in this one, which makes for a very confusing read. While the attack on GOAT is ongoing in the story, we cut to also see the CCG having a coup going on, and unaware of all this, Kaneki and his group are foraging in the forest. There’s also a non-contiguous timeline, which means what I thought was going on simultaneously was actually a few hours before or after.

The story delivered some major punches, both in terms of character death and plot advancement. With Furuta’s secret of being a ghoul out, he attacks Urie and the senior CCG members. In the escape tunnels, Touka and Hinami are fighting off elite squads of the CCG, and Renji himself takes on Tooru and Aura. The battles are all thrilling and full of action, as usual, but I must admit I did not know who was winning or scoring until like the end. There’s one with Kaneki and I initially thought it was his opponent on the ground, and a few pages later I realized no, it was Kaneki himself, who had to push himself to the limits of his abilities.

On a character scale, we get to see backstories of some characters and some resolution to others. Urie finally reconciles his true feelings about his father’s death, as well as the resentment he held towards his partner. There’s the story about the leader of the Clowns, which sorry to say, I wasn’t really interested in? Kaneki’s mental dilemma this time was with him arguing with all the versions of himself, thinking back on his past, his decisions, and his relationships. There’s a lot going on there that he hasn’t resolved, particularly about his life as Haise.

It is, overall, an intense volume, but it does give us relief in the form of the extras which are 4-panel gags of the scenes within the story as well as other stuff. I loved that one with Tooru calling to attack the ’emo side-part’ and Touka immediately tying up her hair! Or the one with Arima posing with his top two, and one of them smoking ruining their cool pose because Arima couldn’t breathe! These were a perfect counterpart to the extreme violence in the story.