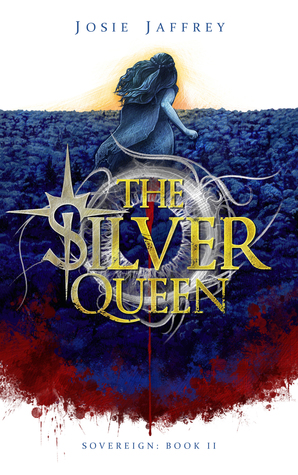 The Silver Queen by Josie Jaffrey
My rating: 3.5 of 5 stars

The last city on Earth is contaminated. Now blood is the only thing that can wash it clean.

Julia is trapped inside the Blue as the Nobles fight over the few humans who are still alive. When the dust settles and she finds herself shackled to a new master, she knows she must escape or die.

Meanwhile, Cam has gathered a handful of comrades and is on his way into the Red to rescue his queen. But not all of his friends can be trusted, and not all of them will make it back alive.

In the aftermath of the Blue getting invaded by the Red, Cam and the Solis Invicti head out again to find and bring Emily home, with Lucas in tow. Meanwhile, Julia is trying to survive a city overrun by Nobles in open war, and with the rise of Sol, peace comes but very topically; she now has no protection from Rufus, who revels in his violence. When getting out of the Blue becomes her only choice, she has to be brave, to fight the conditioning and realize she wants no part of being in the Blue.

This book has a lot of vampire politics in it, because the vampires back in the Blue are aiming for a coup, and Cam and the Solis Invicti are unaware of it. As they chase down the army that is to support the coup, they find that traitors abound. Now, it was also a bit confusing with so many characters (I don’t know like 80% of the Solis Invicti tbh) and then the book also calls back on events from the Fall, which for a person who started the series without reading the original one meant that I’d be lost with the references. The second half raised so many questions – especially with Emily being cagey with Cam, and then there were so many timeline-related questions. I am hoping the next book will get me those answers.

Is it diverse? One of the main characters is gay, has a queer love interest.

Previous books in the Sovereign series