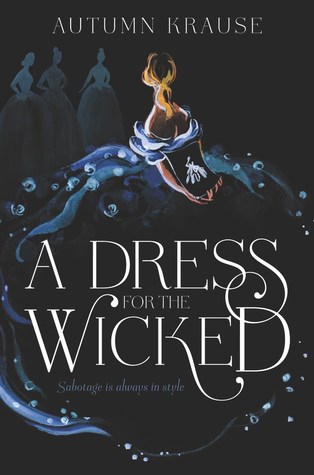 A Dress for the Wicked by Autumn Krause
My rating: 4 of 5 stars

Nothing much happens in the sleepy town of Shy in Avon-upon-Kynt. And for eighteen years, Emmaline Watkins has feared that her future held just that: nothing.

But when the head of the most admired fashion house in the country opens her prestigious design competition to girls from outside the stylish capital city, Emmy’s dreams seem closer than they ever have before.

As the first “country girl” to compete, Emmy knows she’ll encounter extra hurdles on her way to the top. But as she navigates the twisted world of high fashion she starts to wonder: will she be able to tailor herself to fit into this dark, corrupted race? And at what cost?

A country girl gets a chance to enter the capital’s only Fashion House’s competition, and has to prove her worth to get a chance for an apprenticeship, in this novel which gave me some The Devil Wears Prada vibes. Emmaline AKA Emmy is only in the competition because the parliament put pressure on the elitist Fashion House to take in (slightly more) diverse participants, and no one lets her forget it. From the very start, she is the underdog, as she doesn’t have the education or even the casual immersion in city fashion like the other participants, nor does she even have the favor of their boss. Moreover, no one expects her to win this thing, and she is only paraded out as what is basically a PR stunt, not allowing her the same time or rest as the other participants; she thus has to work twice as hard to even come to what they consider ‘competent’. Amid the changing political climate, Emmy finally decides to give them the finger and do what she does best – make wonderful clothes.

The world of this novel is sorta Victorian but the style and fashion are influenced from modern styles and old, giving us lush descriptions of clothing and the history attached to them. In the country of Britannia Secunda (which is not England, but some land that is said to have gotten its independence from England more than a century ago, so where it is exactly who knows), fashion and textiles is their main export, and fashion is an art form as well as a status symbol. There are changing. There’s a whole issue discussed about couture not being suitable for masses, or even the designing of clothing for mass production.

Emmy’s relationship with some secondary characters is lightly touched upon – there is the expected worries about backstabbing and betrayal, though I must say the sabotage isn’t that much of a plot point like it is suggested in the synopsis or on the cover. The main thing is the influence that the Fashion House, and by extension Madame Jolene, wields, and how Emmy has to work to get them to accept her as a talented designer. There is a minor romantic subplot but honestly I couldn’t see much chemistry or development there. Instead, I saw much more of that between Emmy and her roommate Sophie (who has a goth aesthetic) – and this was another instance where I was like – make it bi! Sadly, I was disappointed on that front, too.

The writing was good, and the dialogue and characterization was well-written. The ending was unexpected (the twist really wasn’t, though) in that it still left it quite open-ended. They didn’t really come close to solving their initial problems, so I don’t know if this has a sequel planned or not, but as a stand-alone it sort of gives us a conclusion, like I could say, yes, the characters definitely get a complete development arc so that is satisfactory. Overall, it is an interesting read.

One thought on “ARC Review: A Dress for the Wicked by Autumn Krause”