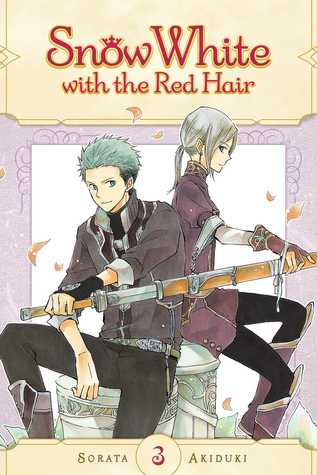 Snow White with the Red Hair, Vol. 3 by Sorata Akizuki
My rating: 4 of 5 stars

Shirayuki’s life as a court herbalist in Clarines seems to be going well. She works hard at her job and gets to spend her free time with Zen. But when Zen’s brother, crown prince Izana, returns to the castle, he has a lot to say about his brother’s new friend. Will Shirayuki be able to overcome this new obstacle in her relationship with Zen?!

With Izana’s presence in the castle, Shirayuki’s position as Zen’s friend gets more and more attention. This volume goes over how their friendship seems to others (though, technically they are somewhat in a relationship because the way they talk about being together already is like several stages into a romance) and particularly how Shirayuki is being looked at. For some, they look at her as an opportunist, for others a way to get into Zen’s good graces – and Izana is not eager to have her in the palace, going so far as to invite Raji to see if somehow she can be sent back to Tanburn. Look, I get Izana’s concern – she is foreign, and an unknown entity to him, but does he have to be like THAT? It feels like he enjoys provoking Zen, too, so it is not clear how much of it is actual worry and how much of it is just to get a rise out of Zen, or how much is a test to see how serious they are about each other.

Keeping aside the drama, though, I loved the scene when Raji unthinkingly announces what everyone was already thinking – that Shirayuki is Zen’s fiance or something; the shock on Zen’s, Haruka’s and Izana’s faces were worth it! Leading from Shirayuki’s status in the palace comes a new arc – with a citizen who comes to seek protection for her people’s birds from her lord, and who befriends Shirayuki, leading to yet more mutterings about her influence over the prince. Shirayuki’s troubles to be with Zen have only seemed to start, but thankfully there’s Obi to help out (he got an official designation!) and there’s her own determination to tough it out.

Previous books in the Snow White with the Red Hair series

One thought on “ARC Review: Snow White with the Red Hair, Vol. 3 by Sorata Akizuki”