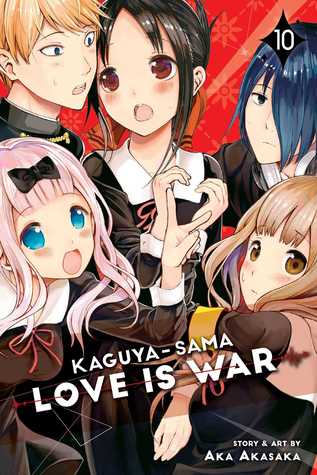 Will Hayasaka prove to Kaguya that she can win Miyuki’s heart after all…while singing karaoke? Then the student council engages in some competitive cooking. Yu tries to spare Miko the embarrassment of the others discovering that she likes to listen to sexy voice actors whisper sweet nothings. And Kaguya declines to participate in a group date involving Miyuki—with a predictable impact on her mental stability.

At some point, you’ve got to upgrade your phone.

Kaguya’s conceal-don’t-feel strategy continues to work, as Shirogane tries to get any reaction from her in the hopes that she has feelings for him. But she is in much more turmoil when Hayasaka tries to seduce him through a group date hang, and then a karaoke session. The girls make up, though – acknowledging that only the other truly understands their twisted nature (also I loved that they called each other sisters). But twisted natures are not limited to them alone, as Kashiwagi and her boyfriend run afoul of cheating suspicions – Kashiwagi obviously brings her concerns to Kaguya, but with Ino there they all go zero to 60 pretty fast. Oh, and we get to meet Maki properly – the agent of chaos in that mess, and who, surprise surprise is related to Kaguya!

On the non-twisted side of things, we get to see both Ishigami and Ino embarrassed, as the former tries to save the latter from the reveal of her interesting listening choices to the rest of the Student Council, but also ends up getting caught himself. Folks, I got a lot of secondhand embarrassment from that one – so much that I had to put down the book for a minute because OMG! The group has some fun activities together again, a cooking contest being one and a party game being another. Obviously both Kaguya and Shirogane use these events to suss out the other’s feelings, and at this point, I just love these two battling their wits against each other. We are on volume 10 but I’m still like ‘nah I don’t want these to get together, I still want to see them run around trying to one up each other’ because they are so entertaining! What adds more to it is that the rest of the Student Council is onto their feelings, but not their devious gameplay so a lot of confusion makes the way for some well-placed jokes. And, yes, they are all so sweet together as a friend squad too – something that Kaguya sorely needs.

All in all, another highly entertaining and hilarious volume!