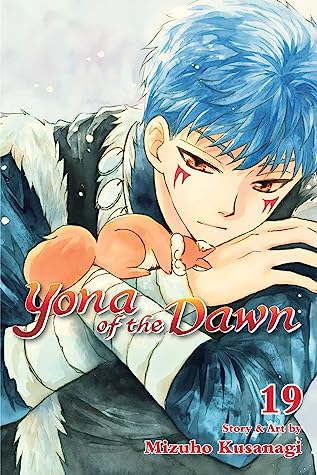 Yona of the Dawn, Vol. 19 by Mizuho Kusanagi

While preparing to set up camp in the forest, Sinha comes across a stone statue of a dragon. When the statue’s mouth starts to close down on Ao, Sinha slices it open and unintentionally releases an ominous spirit! How will Yona and her friends fight the ensuing havoc?

As Yona and her group rest in a forest, they are beset by a ghostly possession of the Blue Dragon, Sinha. Separated and at the mercy of a Sinha who is out to harm them, and who takes an interest in the immortal Zeno. The story of the ghost who possessed him ties back into the history of the four dragons, once again. Zeno once again shows his capacity for parental affection for the group, as he takes on pain to keep them safe. Meanwhile, Yoon shows his maternal affection which is played off in the humor, and is adorable as always.

After this one-off storyline, it returns backs to the Kohka’s issues as the group comes back to the Water Tribe territory and meet Riri, who has a new mission to once again stop the drug trade, from another of Kohka’s neighbor. During this time, Yona thinks back on some of the recent developments – like her growing feelings for Hak, as well as what she thinks of Su Won’s reign. We finally get an answer for whether she seeks to dethrone Su Won, and also through her, what Hak will do if faced with Su Won again. There’s a bonus short with a younger Hak and younger Yona that is all sorts of adorable, too – like, dammit, will these two get together already?!

All in all, a short filler story accompanied by the intro to a new arc, this installment had more of emotional character moments than plot development, but it is still good!

2 thoughts on “ARC Review: Yona of the Dawn, Vol. 19 by Mizuho Kusanagi”