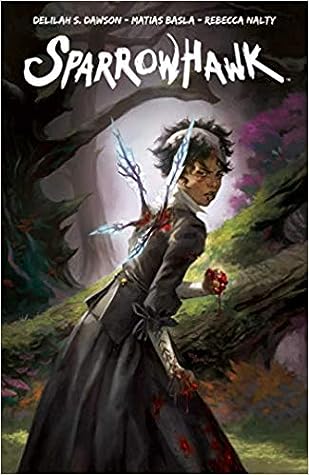 Sparrowhawk by Delilah S. Dawson
My rating: 4 of 5 stars

After a young woman is kidnapped by an evil Faerie Queen and trapped in a far off realm, she must survive teen Victorian fairy fight club in order to get back home.

As the illegitimate daughter of a Naval Captain, Artemisia has never fit in with her father’s family, nor the high class world to which they belong. However, when she is targeted by the Faerie Queen and pulled into another realm, she has no choice but to fight her way back home, amongst evil fairies who want her head, and untrustworthy allies that claim solidarity but have ulterior motives. New York Times bestselling author Delilah S. Dawson (Ladycastle, Star Wars: Phasma) and illustrator Matias Basla (The Claw and Fang) present a gripping dark fantasy tale of a young woman claiming her time and her agency.

This dark tale of a young woman being stuck in Faerie and surviving through it has a circular and chilling storyline. Artemisia has no allies when she lands in Faerie, save for the first one who promises her guidance in exchange for a memory. As she goes through this new brutal world she is in, she initially has to kill to survive and later for strength. With the rules of the realm favoring killers, she soon gets to swinging her sword around, despite the various appeals of her other faerie companion, a prince of Faerie. The story takes it cue from the colonial world that Artemisia comes from, and applies it to her journey through the new land. She questions the violence, the need to protect, the need for strength until it pulls at her in different directions.

As dark and macabre as the story is, the artwork is quite colorful in comparison, but the presentations of Faerie’s colorful beauty has the same kind of sharpness like a predator in the wild. The character design is also quite imaginative, making characters appear fae-like yet monstrous. Artemisia’s transformation through Faerie is reflected through a recurring dream, as well as physical changes. The ending is quite open-ended, but it also feels complete as a standalone, so I found it satisfactory.

Is it diverse? Biracial protagonist

Received an advance reader copy in exchange for a fair review from BOOM! Studios, via Netgalley.