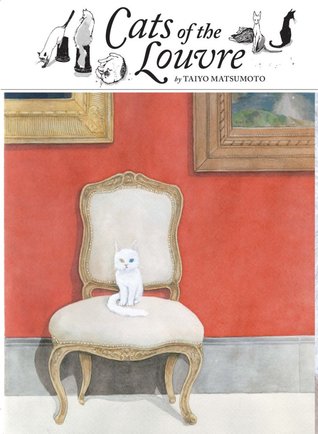 Cats of the Louvre by Taiyo Matsumoto
My rating: 3 of 5 stars

A surreal tale of the secret world of the cats of the Louvre, told by Eisner Award winner Taiyo Matsumoto.

The world-renowned Louvre museum in Paris contains more than just the most famous works of art in history. At night, within its darkened galleries, an unseen and surreal world comes alive—a world witnessed only by the small family of cats that lives in the attic. Until now…

Cats living in the Lourve – when I first saw the synopsis I was like, ‘How cute!’, and I must say I have never felt so betrayed. I mean, I thought it will be magical and adorable, and what I was given was a sad story about a missing girl, a depressed cat and a bittersweet tale? Like, WHAT? The story is, as the name suggests, mostly about the cats living in hiding in some part of the Lourve castle – they are being fed by an old night guard, but they can’t be seen running around during the day, you know, because well they will be caught and removed from the premises. So the community of cats that lives there makes sure that the kitten, Snow Bebe doesn’t get out and be seen, which of course, doesn’t always work. He is seen by one of the museum guides, who along with the night guard, starts to uncover the mystery of his missing sister (who disappeared decades ago into a painting) and is helped indirectly by Snow Bebe. The artwork is a bit rough in its linework and character design, and the anthropomorphic cats switch between cat form and well, the Cats musical form. As I mentioned, it has more sad moments (is it the French setting?) than cute moments and at the end, I don’t really know where the story actually had intended to go, or if it was just supposed to be about their life.