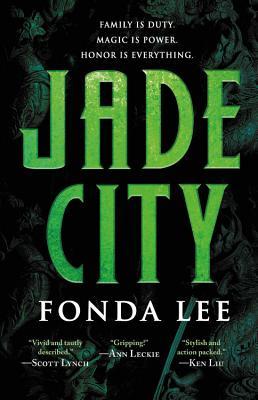 FAMILY IS DUTY. MAGIC IS POWER. HONOR IS EVERYTHING.

Jade is the lifeblood of the island of Kekon. It has been mined, traded, stolen, and killed for — and for centuries, honorable Green Bone warriors like the Kaul family have used it to enhance their magical abilities and defend the island from foreign invasion.

Now, the war is over and a new generation of Kauls vies for control of Kekon’s bustling capital city. They care about nothing but protecting their own, cornering the jade market, and defending the districts under their protection. Ancient tradition has little place in this rapidly changing nation.

When a powerful new drug emerges that lets anyone — even foreigners — wield jade, the simmering tension between the Kauls and the rival Ayt family erupts into open violence. The outcome of this clan war will determine the fate of all Green Bones — from their grandest patriarch to the lowliest motorcycle runner on the streets — and of Kekon itself.

In this high fantasy with a modern urban fantasy vibe, the two main Greenbone clans of Kekon fight for dominance in a war that plays on multiple levels. The story is mostly told from the perspective of the three Kaul grandchildren, Lan, Hilo and Shae, who are the second generation of their clan living in the post-freedom country, and trying to make their lives live up to the legacy of their family. The other two minor perspectives are of Anden, their adoptive cousin, and Bero, who is a young jade thief. The Kaul lead the No Peak clan, and Lan is the Pillar while Hilo is the Horn, which are basically leader and general positions, while Shae is returning from her studies in a foreign country. They are rivals to the Mountain clan, led by a fearsome and ruthless leader and who tries to undermine them in treacherous ways.

The world-building of this book is amazing in its construction: initially being freedom fighters that drove off an invading empire, the Greenbone warriors now engage in the profession of protection, of people and the jade trade, and the businesses in the city pay tribute to either of them. The clan rivalry is partly from differences in how they want to interact with foreign nations, and partly from the constant skirmishes between the territories they control in the city of Janloon. While there is a proper governing body in place, the power is held indirectly by the clans. The culture on Kekon gives preference to people who can handle the most amount of bioenergetic jade, which makes it a precious resource, and a source of pride and strength. Greenbone warriors have a whole code of honor attached to its use, too, which drives some of the conflict in this book. But a lot of the tensions arise from the political maneuvering and power plays that escalate into actual violence, so in totality the war between the two clans plays out on various fronts, and also looks at the ramifications of their choices on how it will affect the sovereignty of Kekon.

Lan, the leader of the family, was perhaps my favorite character, as he is a good man in a terrible situation; he is trying to live up to the greatness of the former Pillar, his grandfather, while also working towards maintaining peace between the clans. Though conditioned like all the clan people, he doesn’t always take the violent approach to resolve issues; to maintain a show of strength, however, he puts tremendous strain on himself. Meanwhile, Hilo, his younger brother has no diplomatic tact and quick to anger from slights against his family, but is a great general to his men, which makes him both hot-headed yet quite protective of his clan, a complexity that is brought out very well throughout the book. Shae, my other favorite, is an astute woman looking to find herself a path that doesn’t involve being a part of her clan’s business, yet she gets drawn in anyway when tensions escalate. The bond between the trio, and the individual relationships between them, as well as their interactions with Anden are done so well, fleshing out complex family drama which adds to each characters’ arc.

Anden, though mostly kept out of the escalating war due to being a student at the Academy, and his arc as a biracial kid, who was also traumatized by his mother’s decline into jade-induced sickness and eventual death, is an interesting one. He feels indebted to the Kauls and though they consider him their cousin, he still holds himself a bit apart from them. His higher jade sensitivity (due to his mixed-race) makes him a strong warrior, but also might spell doom for him and so he is wary. Bero, meanwhile, has never trained in the Academy, and resents the clans for controlling who gets to use jade; he is also an antagonistic character for the book, and his jade fever means he might continue to be one in the next, too.

The book offers a plot that is rich with political intrigue, suspense and well-developed characters. The pacing could have been better, but overall it is a deeply engaging book.

Is it diverse? East-Asian coded setting; one of the POV characters is queer and biracial

One thought on “Review: Jade City by Fonda Lee”