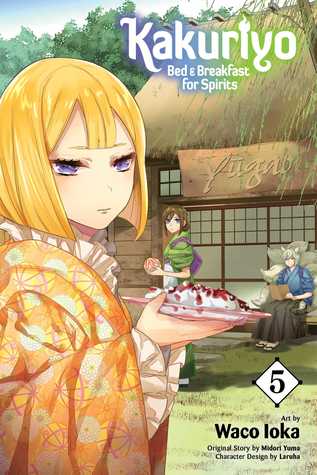 Kakuriyo: Bed & Breakfast for Spirits, Vol. 5 by Midori Yuma
My rating: 4 of 5 stars

Faced with the choice of being married to a strange spirit or being made into dinner, Aoi decides to create a third option for herself!

Aoi Tsubaki inherited her grandfather’s ability to see spirits—and his massive debt to them! Now she’s been kidnapped and taken to Kakuriyo, the spirit world, to make good on his bill. Her options: marry the head of the inn her grandfather trashed, or get eaten by demons. But Aoi isn’t the type to let spirits push her around, and she’s determined to redeem her grandfather’s IOU on her own terms!

Aoi has hopes that her time in Kakuriyo will mean more than just toiling to repay her grandfather’s debts. She has a personal mission to find the yokai who kept her from starving when her mother abandoned her. Yet all she has to go on is the memory of a simple white-faced mask. She gets an important clue when a well-fed guest in a similar mask tells her it’s a common souvenir from the southern lands. But how can Aoi investigate further when a lone human in Kakuriyo is sure to become a snack for the first spirit to pass by?

Aoi finally catches a break when the guest who liked her boxed lunches recommends her restaurant in the press, as well as gives her clue regarding the yokai who saved her in her childhood. Her infamy as her grandfather’s grand-daughter and being an ogre bride works in her favor, somehow and as Aoi works on getting the restaurant earning modest amounts to fulfil her debt, she also has chance meetings with two significant characters – one being Byakuya and the other, Odanna, both being adorable in nature. Seeing Byakuya flustered was a delight, and the cat spirits were so cute! Odanna, meanwhile, takes her on an impromptu walk up the mountain to the nearby hot springs. And then, perhaps the biggest star rising for her is the fact that she gets an opportunity to cater for an extremely important guest, as well as the fact that she is visited by a rare spirit. I am loving the slow progression of the romance between Aoi and Odanna, as well as the mystery of the masked yokai. The artwork is beautiful as ever, and the food just makes me drool so there’s always that. Aoi thinking of adapting Utsushiyo dishes with Kakuriyo ingredients also is a nice development, as it will develop her unique brand.