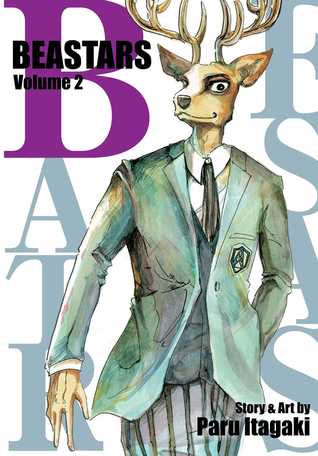 At a high school where the students are literally divided into predators and prey, it’s personal relationships that maintain the fragile peace. Who among them is a Beastar—an academic and social role model destined to become a leader in a society naturally rife with mistrust?

Dwarf rabbit Haru’s odd behavior causes wolf Legoshi to flee. Later, Legoshi learns that the school drama club recruits new students to help them with their inner demons. What does their club president, red deer Louis, wrestle with…? Before Legoshi can figure it out, Louis forces him to face not only his own weaknesses but also his strengths. Legoshi’s character is truly put to the test when his onstage fight choreography with tiger Bill turns all too real. Has someone broken the school rules? And could the battle between Legoshi and Bill involve…a female?

I thought the mystery of Tem’s death would be something pursued in the main storyline, but the story instead meanders into the subtle shockwaves from that incident. As the drama club gears up for their production, Loius battles with his injury and the expectations on him, while Legoshi is still reeling from the fact that he had almost attacked a rabbit. Meanwhile, another drama club member, Bill, seeks to place a carnivore back up on the social heirarchy by taking Louis’ place in the play, but his approach of how to show his strength causes a conflict with that of Legoshi.

The series continues it masterful exploration of characters, as it gives several their due in this volume too. Louis’ attention to Legoshi is explained further, as is the resentment he feels at being helpless. Legoshi still battles with his nature, as he strives to keep the wilder side of himself pushed down, but also he sees the point of it rather than just being angry over having to hide his strength; instead he chooses to show it in a place where it would be apt. Haru’s image in the school is also shown from the point of view of how the other student’s treat her; I really can see why she would prefer the garden. Legoshi’s encounter with Haru is an interesting aside, because for Haru she meets a boy who isn’t instantly interested in her for sex, and for Legoshi, it was unusual for him to be treated as just a boy, not a carnivore.

The complex characters and the interplay between their society and their personal motivations are the most interesting parts of this series, as well as the attention to world-building and the drama. Loving the storyline so far, even if it wasn’t the mystery-focused plot I had initially assumed.

Previous book in the Beastars series