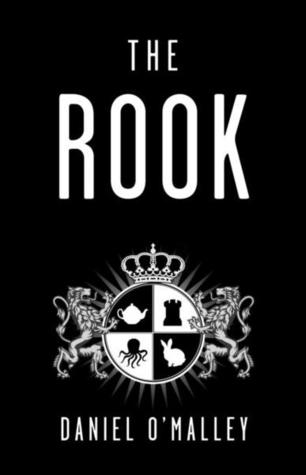 The Rook by Daniel O’Malley
My rating: 4 of 5 stars

“The body you are wearing used to be mine.” So begins the letter Myfanwy Thomas is holding when she awakes in a London park surrounded by bodies all wearing latex gloves. With no recollection of who she is, Myfanwy must follow the instructions her former self left behind to discover her identity and track down the agents who want to destroy her.

She soon learns that she is a Rook, a high-ranking member of a secret organization called the Chequy that battles the many supernatural forces at work in Britain. She also discovers that she possesses a rare, potentially deadly supernatural ability of her own.

In her quest to uncover which member of the Chequy betrayed her and why, Myfanwy encounters a person with four bodies, an aristocratic woman who can enter her dreams, a secret training facility where children are transformed into deadly fighters, and a conspiracy more vast than she ever could have imagined.

NOTE: not a YA novel!

The Rook is quite interesting in that it defies expectations of what it might be – it is a mystery with an amnesia plot, but that is not the central core of the storyline; it has a secret organization that governs supernatural incidents, but is so mundane and bureaucratic in its running; it has a heroine who prefers working in an office that being out in the field, even though her abilites are quite powerful. It has conspiracy, humor, and action all mixed up in an entertaining cocktail.

Firstly, lets begin with the amnesia – Myfanwy wakes up in her body with no memory of her past life, and she is left letters that detail it by her ‘predecessor’. The approach to the amnesia itself felt different – this is not a person trying to recover her memories, but instead it is treated like a new person taking over this body and trying to live its life; it was discomfiting at first to see it from that angle but the new Myfanwy and the old Myfanwy (referred to as Thomas) are different people because of their experiences and that is what this book explains well. Now, Myfanwy is more outspoken, more bold than Thomas, which makes for interesting and humorous situations where she does what people don’t expect of the timid Rook. Eventually she settles in, but the fact remains that she still has to quietly investigate who had reason to harm Thomas, because that means her life is still in danger.

While this book has conspiracy and danger and action, the approach to it is wry and sarcastic humor. Even Thomas’ letters to Myfanwy, and her whole file is filled with quips and quiet dragging of the Chequey and its members. She is also the way the book provides its exposition about the history and the working of the Cheqeuy, so initially it feels like the main plot is being set aside repeatedly so Thomas can explain to Myfanwy (and us, the readers) how it all works and who is who and what is their backstory. As the conspiracy gets deeper, we come to realize that their old enemy is rearing its head again, and now the Chequey has to change its tactics in how to deal with them. Myfanwy’s amnesia is sometimes an asset to her, as she is not conditioned by their thinking and their set ways and can apply her own strategy to resolving matters.

The story has a lot of shocking elements and the supernatural incidents are all random in nature, with no way to predict what they are so it makes for an interesting read as you learn about what all things exist in this world. Then there are also other supernatural entities that are treated in such an off-hand manner, like the fact that one of the members of the Court is a vampire, or the egos of the characters getting between each other. The ending also took an unexpected approach to solving the problem, and it concludes the story nicely but also sets up enough for sequel potential.