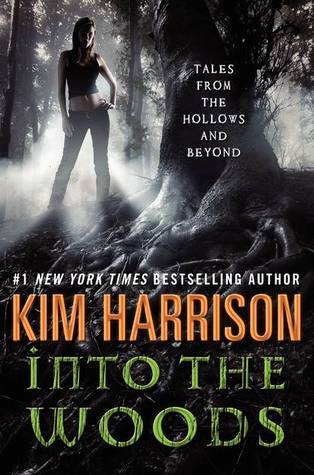 Into the Woods: Tales from the Hollows and Beyond by Kim Harrison
My rating: 4 of 5 stars

Enter the Woods…If You Dare

For centuries, the woods have been a pivotal part of the wonder and danger of fairy tales, for once you enter anything can happen. Elves, druids, fairies – who knows what you will find once you dare step into the forest?

And now, New York Times bestselling author Kim Harrison ventures into these mysterious, hidden lands of magic and mystery in her first short-story collection. Into the Woods brings together an enchanting mix of brand-new, never-before-published stories and tales from Harrison’s beloved, bestselling Hollows series.

The tales her include an original Hollows novella, Million-Dollar Baby, about Trent Kalamack’s secret elven quest in Pale Demon; two original short stories, “Pet Shop Boys” and “Temson Woods,” that explore just what happens when humanity and the supernatural collide; and two novelettes, “Spider Silk” and “Grace,” set in new worlds of imagination and adventure. Into the Woods also contains all of the previously published Hollows short stories – together in one volume for the very first time.

Step into the woods and discover the magic for yourself. Original.

Including:
The Hollows
The Bespelled
Two Ghosts for Sister Rachel
Undead in the Garden of Good and Evil
Dirty Magic
The Bridges of Eden Park
Ley Line Drifter
Million Dollar Baby

Into the Woods has several Hollows stories and some other urban fantasy stories, and for the former, it is definitely a must-read if you are fan of the series; for the latter, each story was interesting enough to warrant its own universe.

For the Hollows stories, I don’t think I need to say that some of them fill in gaps in the main storyline, plus give insight into characters that were introduced in the series. That most of them are also from the point of view of characters other than Rachel is also a bonus, what with each of them being a different Inderland species with their own worldview. Ivy’s extra senses along with her rebellion against the vampire order make for an interesting story in Undead in the Garden of Good and Evil, while we get a looksie into the pixy world with Ley Line Drifter as we see from Jenks’ view, where he sets up an investigative office for other pixies, and also how their culture works, in much more detail; we also get an introduction to Daryl, who is a minor character in the main series. If you were invested in the elf quest in Pale Demon, Million Dollar Baby gives all the exciting details, as well as supports the character development in Trent. The Bespelled reminded me never to trust Al, no matter how much his relationship with Rachel changed in the later books.

Coming to the non-Hollows stories, each one is its own flavor of urban fantasy. Pet Shop Boys has a world where vampires and fairies are interchangeable and there are other shifter creatures too. I honestly would love a more expanded story from that, because it has potential. Meanwhile, Temson Estates has a nice dryad story, and Spider Silk has a much more horrific one, with the ambiguity lending it an extra kick. But more than anything, I would love to read more stories in the world of Grace, where all powered individuals have sorta like ley line magic, but is still slightly different in that it makes them like batteries. The main characters’ struggles as she tries to capture a rogue powered teen was engaging, and I was invested quickly, considering it is a short story.

Overall, it is a nice collection of stories, but yeah, you have to be familiar with the Hollows books for the first set.

Other books in The Hollows series