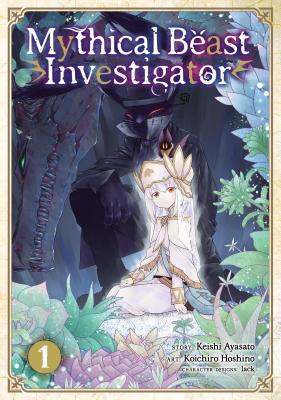 A lushly illustrated manga about a girl and her mysterious protector, sure to appeal to fans of The Ancient Magus’ Bride and The Girl From the Other Side: Siúil, a Rún!

Ferry is a mythical beast investigator, charged with keeping the peace between humanity and the many magical creatures that populate the world. When a dragon starts attacking a small village, Ferry and her otherworldly bodyguard, Kushuna, go to investigate. They soon discover that the dragon has a good reason for its rampage.

Ferry is one of the officials tasked with investigating instances of mythical beasts and humans interactions, and serves to mediate conflict between them. While the world-building of this fantasy world is rudimentary and we do not know much about Ferry’s own capabilites or Kushuna’s origins, the main theme of the stories therein is to show the other side of traditional stories we know. A dragon rampaging a village is doing so in revenge for the village abandoning one of its maidens to bandits. A mermaid’s love for humanity manifests trouble for the human in question, who is envied for the gifts he receives. During these events, Ferry looks for out for both the humans and the mythical beasts, making people understand where the beast is coming from, and dissipating tension arising due to ignorance. And of course, if people look down on her because of her diminutive size or her apparent age, there’s her muscle – a anthropomorphic rabbit who wields darkness. I loved the dynamic between her and Kushuna – who is scary for others, but gentle and adoring towards his master, while also teasing her pet bat, Trow for being pretty much useless. The artwork is good and the mood is (mostly) light, making this manga delightful to read. I just wish there was more about the world, and some central storyline to work towards.