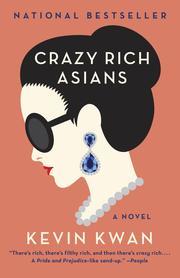 Crazy Rich Asians by Kevin Kwan
My rating: 3 of 5 stars

When Rachel Chu agrees to spend the summer in Singapore with her boyfriend, Nicholas Young, she envisions a humble family home, long drives to explore the island, and quality time with the man she might one day marry. What she doesn’t know is that Nick’s family home happens to look like a palace, that she’ll ride in more private planes than cars, and that with one of Asia’s most eligible bachelors on her arm, Rachel might as well have a target on her back. Initiated into a world of dynastic splendor beyond imagination, Rachel meets Astrid, the It Girl of Singapore society; Eddie, whose family practically lives in the pages of the Hong Kong socialite magazines; and Eleanor, Nick’s formidable mother, a woman who has very strong feelings about who her son should–and should not–marry. Uproarious, addictive, and filled with jaw-dropping opulence, Crazy Rich Asians is an insider’s look at the Asian JetSet; a perfect depiction of the clash between old money and new money; between Overseas Chinese and Mainland Chinese; and a fabulous novel about what it means to be young, in love, and gloriously, crazily rich.

I came for the book from the movie, so it was interesting to compare how they choose to adapt this source material. So the movie is a bit more upbeat while the book is, well, crazy. So the story starts off simple – Nick Young, a scion of an old, practically royal Singapore family, brings his girlfriend of two years to his city, without telling her what craziness she is about to get into. But while it is about Rachel’s and Nick’s story being the catalyst for this plot, a lot of it is about his family and extended relatives and the whole drama of them being who they are. It is a peek into Singaporean society, and the consumerism and elitism of these old and rich families.

While the book is entertaining as a whole, and gives you first-person insight into how their society is, the fact is that there are way TOO many characters to keep track of. Even with the family tree at the start of the book, I pretty much gave up on reminding myself who is who by the time I reached part 3 and stuck to only remembering the major characters. I also didn’t read it in one sitting, (which is my usual style because I have a shit memory), and instead read it over a week (it was a buddy/group read) so it would have been difficult to keep all those people in head for that long anyway. And the characters, well, they are all mostly terrible – this may be the second book in my life (the other was Wuthering Heights) where I hated most of the characters, and thus by extension found it tiresome to read their POV.

Rachel’s POV and Astrid’s POV dominated for me, because they each have a different insight into the invasive nature of these families, the former as an outsider, and the latter as basically its princess. Rachel’s viewpoint initially was about how glitzy and opulent their lives were; her POV actually doesn’t give any insight into her as a character and instead what we could piece together of her characterization was from seeing how other characters see and describe her. Meanwhile, Astrid’s plotline almost steals the limelight away from Rachel’s and Nick’s story, because hers is quite dramatic. I know this is supposed to be romance, but I didn’t find Nick endearing at all – mostly it was because of how he basically threw her to the wolves unarmed, but also because dude is so oblivious! I think I like movie Nick better, but then again the movie did a good job of hiding its contempt for most of the characters, too, while the book lays it out making you go ‘oh my god’.

Finally, it was interesting, but I found the multiple POV style tiresome, and the characterization to be topical.

Is it diverse?: All Chinese characters; written by a Chinese author