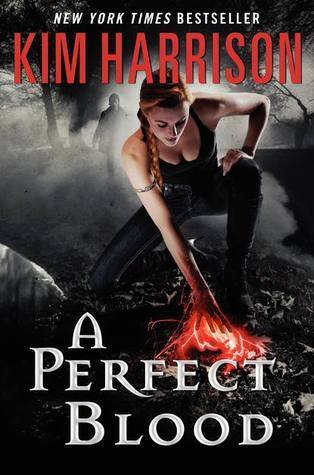 A Perfect Blood by Kim Harrison
My rating: 4 of 5 stars

Ritually murdered corpses are appearing across Cincinnati, terrifying amalgams of human and other. Pulled in to help investigate by the I.S. and FIB, former witch turned day-walking demon Rachel Morgan soon realizes a horrifying truth: a human hate group is trying to create its own demons to destroy all Inderlanders, and to do so, it needs her blood.

She’s faced vampires, witches, werewolves, demons, and more, but humanity itself might be her toughest challenge yet.

A Perfect Blood introduces a new threat to Inderlanders in the form of a human hate-group that is attacking witches, while also calling back on an older plot thread. After the events of Pale Demon, Rachel has been declared a demon on paper, but that comes with a loss of rights and privileges, as demons aren’t granted a legal existence this side of the lines. Additionally, Rachel has shackled her powers with Trent’s elven bracelet that nullifies any ley line magic in her, as well as her connection to the demon collective; Rachel is basically an earth witch now. This new version of her life is harder for her to deal with, but she also doesn’t want to go into the Ever After and be blamed for the leak of magic, so she’s staying put. Not a great strategy when there’s a group that is looking to synthesize demon blood.

First of all, Rachel’s actions during this book had me a bit confused as to what was the point of all that she went through in the last 9 books. It makes for a great story from a plot point of view, but the fact is that Rachel would have figured out a way to make it work; she is definitely not the kind of person who would willingly put her greatest asset under restriction, just to avoid the other demons. Remember this is the same witch who has negotiated with and tricked demons multiple times in the past, to gain an advantage; she turned one of the big bads of the earlier books, Al, into her ally. So, yeah, no I don’t get why Rachel would keep that bracelet on, even when there is a clear threat and she desperately needs access to her magic; it just felt forced to conform to the plot. Secondly, Rachel’s complex about Ivy and Jenks moving on with their lives made no sense, because there was no evidence of that in this book, at least nothing that is different from the status quo in earlier books.

The HEPA plot, though, was an interesting add-on to the series – it suggests as to what happened immediately after the Turn (obviously a lot of Inderlanders were killed when outed) and gives a subsection of their society, the humans, a chance to be involved in the plot. Throughout the books, the humans have been quiet background figures, except for the FIB personnel, but we know they are not all very happy with co-existing with Inderlanders so this was a natural consequence. What was more interesting in what the other secret revealed, towards the end, means for Inderlander-Human relations. Additionally, I felt like something was being hinted as to the appearance of the demons but it still seems like a half-formed theory in my mind for now; it might point out to the start of the elven-demon war or it might not but I am interested to see how it plays out now that we are in the last few books of the series.

Speaking of events playing out, I felt the whole witches-come-from-demons thing that was such an important plot point for books 8 and 9 was not given much significance in this book? I thought that would cause a bigger fallout, not just put witches on the HEPA radar? Like the fear was of public outcry and witch trials, which is how Rachel was able to leverage that info with the Coven but in this book, nothing really happened with that bit of information? It was hinted that the majority might think that Rachel is only using it as a label and that she is being restrained by the coven, but still, where are the conspiracy theories floating around?

On the relationships side, Ivy’s relationship with Glenn continues, with some obstacles though – arising from the events of this book. However, the other private side of their relationship has had a new addition in the form of Daryl whose origins are explained in another short story – Ley Line Drifter (see Into the Woods: Tales from the Hollows and Beyond) – but not much information given in the main series itself so I was confused for a bit there; remember this is a series where Rachel recounts her ‘this is how my life works’ spiel in every book so I was expecting a quick recap of who Daryl is. Rachel’s relationship with Trent, himself is going somewhere as he seems to be a more mature and understanding person now; her trust in him and his magic is coming slowly but it is coming.

Overall, it is an interesting installment, with a new threat and possible plot-lines for further books, but I have to admit, Pale Demon is a tough act to follow.