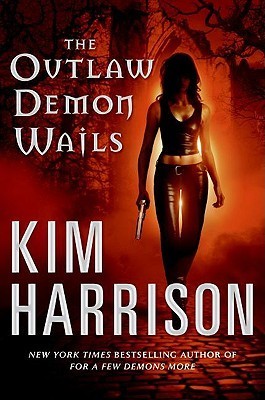 The Outlaw Demon Wails by Kim Harrison
My rating: 4 of 5 stars

To save the lives of her friends, Rachel did the unthinkable: she willingly trafficked in forbidden demon magic. And now her sins are coming home to haunt her.

As Rachel searches for the truth behind a terrifying murder, an even greater menace threatens, for the demon Algaliarept will stop at nothing to claim her, and the discovery of a shocking family secret throws Rachel’s entire life into question. If she is ever to live free, Rachel must first walk willingly into the demonic ever-after in search of long-lost ancient knowledge.

But when you dance with demons, you lay your soul on the line . . . and there are some lines that should never be crossed.

The Outlaw Demon Wails picks up a couple of months after Kisten’s death, with Rachel and co having no leads as to who was the undead vampire to whom Kisten was given as a gift. But before Rachel can untangle the circumstances of her lost memory from that night, she has a new problem on her hands – Al is out of demon-prison (because summoning trumps all laws and restrictions, either side of the lines, in a magical get-out-of-jail-free card) and out for her blood. Since he is hunting her down on a daily basis, she has to yet again think fast, and deal with demons. Said demons coming to this side of reality means her already rising notoriety as a black witch is gaining ‘witnesses’, and she has to fix the situation before she winds up dead. Rachel also has to make peace, yet again, with her ability to do demon magic, and the smut she is accumulating on her soul.

The book, while managing a central plotline of yet another death threat against Rachel, also has a lot of emotional development. We meet Rachel’s mother, who has been hiding a secret from her for a long time; this also means that Rachel’s perspective on her family changes drastically. The other significant relationship development is the one between Rachel and Ivy and before we get into that, I feel I should point out that this book does an excellent portrayal of circumstances versus want. Rachel’s psyche is in a very guilt phase during most of the book, because she feels her reckless decision making in the past has caused a lot of problems for her and her loved ones, and particularly are the cause of Kisten’s death. So she is fighting against her nature, to try to be more cautious, but Ivy and the hope for a stabilized relationship with her have her in a bind as does the reintroduction of Marshal, who she is attracted to; on one hand, she wants to pursue these, but past experiences have her restrained.

Personally, I’ve always read Rachel’s attraction towards Ivy from a split attraction model base (though it isn’t spelled out as such in the book, with Rachel going as far as to repeatedly claim she doesn’t swing that way), as I think she is romantically (but not sexually) attracted towards her. A particular fear rising up dashes any hope of even a blood relationship between them, because of Rachel’s recent past. But Ivy and Rachel work fantastically as a platonic couple, though, much like how Rachel finding Jenks attractive doesn’t take away anything from their friendship. Rachel’s mom’s past love life is also a complicated issue that is discussed topically here; I also gotta say that because of that, her mom is very understanding towards her romantic troubles but really does she have to push the issue to find a partner?

Coming back to the Al thing, Rachel once again uses her wits and her talents to craft a plan that saves her hide and keeps her back in reality, and I know it seems like Rachel makes reckless choices, but to turn an enemy into an ally? That’s clever! Of course, this means her dealings with demons become more involved, but she is trying to survive with what she is given, so I understand her choices. Overall, though the book doesn’t have a mystery at its core, it does a good job with the plot it has.