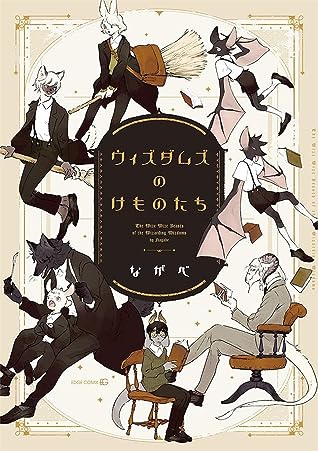 The Wize Wize Beasts of the Wizarding Wizdoms by Nagabe
My rating: 3 of 5 stars

Deep in the forest lies a mysterious school of magic: Wizdoms, an institution attended by beastmen of all kinds. These studious fantasy creatures have come to live, learn, and perhaps even fall in love in this enchanting space. In this collection of BL stories by master mangaka Nagabe, follow the beauty and surprising humor of magical beasts with human hearts.

Warnings: use of love potion (like date rape), homophobia

The Wize Wize Beasts of the Wizarding Wizdoms is like what Hogwarts would be, just more gay, and with furries. It’s a collection of separate but related stories set in the same wizarding school, with anthromorphic beasts as the students (there are humans in the world but they are like myths to these beasts) and all having gay characters at their core. I must say, the first story itself put me off and kinda ruined the book for me, because a hare uses a love potion to get a kiss from the cat, and even with that, just the intent was enough to disgust me. There was another story that had implied a teacher starting to recognize a student’s crush on him (which is okay or, well, kinda expected) and feeling something in turn (not so okay) even if not acted upon. Yet another had a corvid manipulating his straight peacock friend(crush)’s dating opportunities which is like a nope from me. Still, there were other cuter stories, like the one with the bear and the human (no I am not using a metaphor here, lol) and the hinted at teacher romance between a unicorn (whose society is homophobic) and griffin. The bat one was not exactly romance, but more like an exploration of teen sexuality. The artwork is pretty, and storyboard was good, and the stories incorporates animal characteristics in an interesting manner. Overall, I would say with the hit-or-miss scenario with the stories, I gave it an on-the-fence 3 stars.

One thought on “ARC Review: The Wize Wize Beasts of the Wizarding Wizdoms by Nagabe”