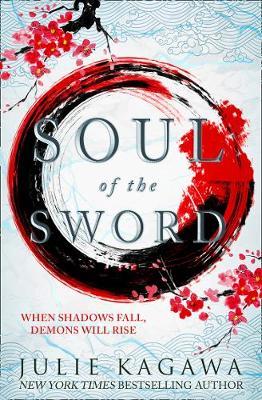 Soul of the Sword by Julie Kagawa
My rating: 5 of 5 stars

One thousand years ago, a wish was made to the Harbinger of Change and a sword of rage and lightning was forged. Kamigoroshi. The Godslayer. It had one task: to seal away the powerful demon Hakaimono.

Now he has broken free.

Kitsune shapeshifter Yumeko has one task: to take her piece of the ancient and powerful scroll to the Steel Feather temple in order to prevent the summoning of the Harbinger of Change, the great Kami Dragon who will grant one wish to whomever holds the Scroll of a Thousand Prayers. But she has a new enemy now. The demon Hakaimono, who for centuries was trapped in a cursed sword, has escaped and possessed the boy she thought would protect her, Kage Tatsumi of the Shadow Clan.

Hakaimono has done the unthinkable and joined forces with the Master of Demons in order to break the curse of the sword and set himself free. To overthrow the empire and cover the land in darkness, they need one thing: the Scroll of a Thousand Prayers. As the paths of Yumeko and the possessed Tatsumi cross once again, the entire empire will be thrown into chaos.

With Tatsumi possessed by the demon Hakaimono, Yumeko and squad have to make a decision to prioritize the delivery of the scroll to the temple where the other piece is kept. Their way there is not direct, and goes through a meeting with the Shadow clan. Meanwhile, Hakaimono, looking for ways to get rid of his entrapment, approaches the Master of Demons, a blood mage who had wreaked havoc on the land some centuries ago, to ally with him. Fighting through personal demons, and actual ones is pretty much the theme of the book, as Yumeko prepares to take on Hakaimono himself.

The level of action in this book is as much as that in the earlier one, with Hakaimono’s POV delivering some brutal battles with the yokai he comes across, and his trek through a haunted forest. He frequently taunts the Tatsumi inside him, while also being affected by his human emotions. Yumeko and her friends mostly have to contend with the shady Shadow clan, whose internal politics threaten their safe passage through to their path. They also have to pass through Meido on their travels, the spirit realm that is somewhat like a purgatory for lost souls. All of that was built up so well, as was the even more shadier figure controlling events from the background, Lord Seigetsu whose activities we see through Suki’s eyes. Some history is also explored in this book, chiefly how Hakaimono came to be in the hands of the Shadow clan, and why they were demonslayers.

While the action takes a lot of space in this book, there are some emotional developments too. There is a significant romantic development in the book (which I was so excited about) and through that, Yumeko realizes her feelings for Tatsumi; in the initial stages however, I was amused about how clueless she was while they were flirting. Towards the ending, the book also delivers some gut punches, with all that foreshadowing beforehand, and then the actual battle with so high stakes almost threatening to stop my heart. Overall, I would say it was a thrilling ride of a book, with fantastic action scenes, awesome world-building, and newer challenges.

Is it diverse? Japanese setting with all POC characters (ownvoices), queer secondary characters and a gay side couple

Received an advance reader copy in exchange for a fair review from HarperCollins, via Netgalley.

Previous book in the Shadow of the Fox series

4 thoughts on “ARC Review: Soul of the Sword by Julie Kagawa”