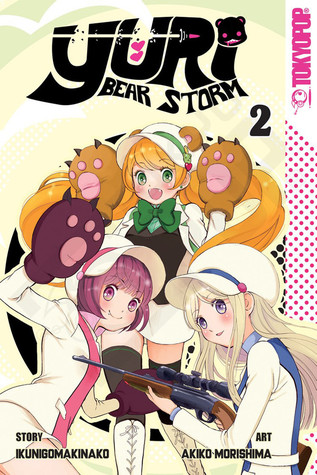 When Ginko discovers a pendant that releases her hidden memories, she learns the truth about her mother and Kureha’s. Despite Kureha’s feelings for her, Ginko decides to distance herself from the girl she loves to keep her safe. Bears and humans can’t love each other — or so her mother said.

The second volume has Kureha confessing her feelings for Ginko, and agreeing to Lulu’s plan to go along with Ginko’s ‘bear’ delusion, and also further expands on Ginko’s mother and her relationship with Kureha’s mother. Ginko, remembering Reia, starts to push Kureha out, who also gets a new friend; said friend helps Lulu think over her own past and what had led her to Ginko. The backstories are, well, tragic, and it somehow doesn’t sit with the whole ‘bear’ thing, even as a metaphor. However, the series wants to stick to it, so I guess we bear with it (ba-dum-tss) during all the angst and heartbreak going on. There are some inappropriate situations with Lulu and Kale, and I am not going to even start with the whole Yurika thing; the latter just pops in the most convenient ways. The story book was a plot hole I didn’t understand – if Kale was the one to write it, how did Reia read it to Kureha (I mean, the ending, dude, that is a spectacularly creepy book if it was written before Kureha’s birth). And about the ‘romance’ I don’t really know what to say – it tries to be cute, but then there is that angst and random fanservice panty shots that sort of ruin the vibe you know. Overall, a better and more coherent volume than the first but still far from being a plot with direction.