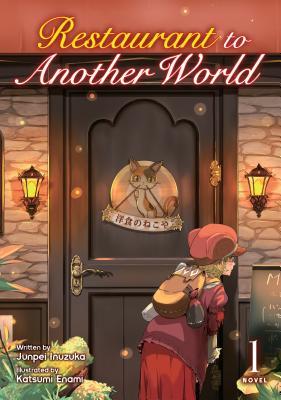 Restaurant to Another World (Light Novel) Vol. 1 by Junpei Inuzuka
My rating: 4.5 of 5 stars

The basis for the beloved anime about a restaurant that welcomes fantasy creatures to dine!

In Tokyo lies a small restaurant called “Western Cuisine Nekoya,” ordinary in every way—save one. Every Saturday, its door connects to another world! Follow along as a cavalcade of curious guests from half-elves to samurai, dragons, halflings and vampires enter its premises, all with the same goal in mind: to fill their stomachs with the most mouth-watering of foods.

A series of separate stories set at the same restaurant, this light novel is a charming ode to culinary delights. Imagine a person from a medieval fantasy land coming to our modern world, and tastes food that is prepared differently from what they are used to, with sauces, and condiments, and different cooking methods; it would be like eating in paradise, right? That’s what it is mostly about: the simple delight of discovering extremely tasty food! Each story is about a specific patron, and titled according to their favorite dish (which is also their nickname in the restaurant). The regulars vary from witch princesses, to vegan elves, to Lilliputians, to samurai warriors – all of them coming from another land where there is magic and stuff, and has similar cultures. While the stories aren’t arranged chronologically, you still get to see the characters from one story in another, because they are all regulars on the same day that the restaurant is open, and most of the world-building happens slowly over the course of the different stories.

Foodies will love this book – I was blown away with the descriptions of the food; it is the best I have come across, and honestly, made my mouth water and gave me an extreme case of nostalgia for Japanese food (I could almost taste the pork loin cutlet good god!) I mean, you can feel the eagerness with which they wait for every Saturday so that they can go and have their favorite dish. Or in the case of some stories, them being introduced to the food and the way they relish that burst of flavor? I FELT that. Another charming addition was the rituals some of the patrons had – like the lizard people basically having a feast for it, the Lilliputians with their whole protocol to get inside the restaurant and to the human-sized table, the dragon whose greatest treasure is the beef stew, or even the witch princess who devises a refrigerator-like spell to keep her parfaits cold. Some of the stories are cute, like the samurai and the mage from two opposing nations, bickering but sitting down together for the same meal (okonomiyaki).

Coupled with these, are the illustrations – which are of the patrons, mostly, and not the dishes themselves (as I expected) – and they are quite well-done. The overall tone of the book is light and is just about appreciating food, but there is quite a lot of thought put into the world, too, and how such a system would work. Overall, this novel was a delight to read, and if you get hungry while reading it, well, keep some snacks handy!