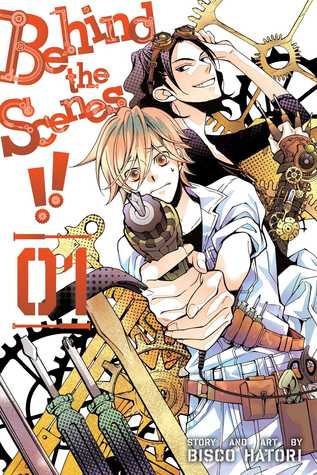 Ranmaru Kurisu comes from a family of hardy, rough-and-tumble fisher folk, and he sticks out at home like a delicate, artistic sore thumb. It’s given him a raging inferiority complex and a permanently pessimistic outlook. Now that he’s in college, he’s hoping to find a sense of belonging. But after a whole life of being left out, does he even know how to fit in?!

It’s two months into Ranmaru’s college career, and if he’s learned one thing, it’s that he’s really uncomfortable around other people. But when he stumbles into a zombie mob attack, he’s forced out of his comfort zone in the most dramatic way possible! Of course it’s just a movie shoot, but when he wakes up from his ignoble faint, he’s been whisked away behind the scenes with the Art Squad! Could this group of weirdos be what Ranmaru’s been looking for all his life?!

Bisco Hatori, creator of Ouran High School Host Club, Vol. 1 writing a new series? Of course I had to see it! This is about a young freshman at university, who is not assertive and is insecure and feels that whatever he does causes problems for others. When he comes across the Art Squad (which is a club that basically provides props, costumes, sets etc for the film clubs), they recruit him because he is good at making and fixing stuff. And slowly, he is starting to see the magic of what it means to create something.

The tone is mostly slapstick comedy, with some heart-warming moments thrown in. Ranmaru is learning the ropes of the activities of the Art Squad, and while the president seems like a hard-ass, he is a loveable bear of a hard-ass who doesn’t compromise on quality and seeks perfection in their work. There are two projects that are shown in this volume – one with a film club that is being plagued by sabotage, and another with an exacting director who keeps making life difficult for the Art Squad’s main costume designer.

The characters are all lovable, dorks in some cases and enlightened in others, and though they seem like a trope ensemble cast, there is effort devoted to fleshing them out. The artwork is good, and detailed in some cases. All in all, I am excited for more shenanigans!