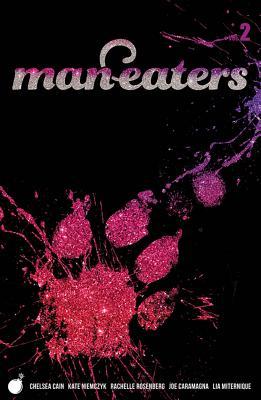 Twelve-year-old, Maude, has a case of puberty-induced pantherism, a missing friend, a detective dad who thinks she may be a killer, a mom with a big secret, a unicorn hiding in her bedroom, and a plan to overthrow the patriarchy.

From the creative team that brought you the groundbreaking and Eisner-nominated series Mockingbird, this trade paperback collects the second arc of the unconventional coming-of-age tale–including the mental hygiene guide for girls, “WHAT’S HAPPENING TO ME AND HOW CAN IT BE STOPPED?”

Man-Eaters continues to highlight the impossible standards that girls are subjected to, as well as society’s obsession with protecting masculinity. In this volume, one of Maude’s classmates has turned into a big cat, and the missing girl is a big hole of a question mark that has everybody on edge. They are being monitored even more, and the fear of an attack has increased. Meanwhile, Maude has yet to have a discussion with her father (who suspects she has turned too), and about her and her friends shunning the estrogen-laced products that they are all supposed to have. As usual, the last chapter is fully dedicated to in-universe ads that highlight just how ridiculous companies have become over this outbreak, and honestly I don’t have enough words to go into how perfect they are for the tone of the book. There’s an UNO-like card game with cards having tampons, lemon, etc, a propaganda-filled school activity game that is ‘not a game’ meant to scare all the uterus-havers into compliance. But the biggest bombshell is dropped at the end of Ch 7, and while I love this series even with its jokes and slapstick comedy, and its bare-bones plot that doesn’t advance much, I did welcome that development very much! Oh, and one final thing I liked – they did acknowledge trans kids in this one, something that was missing (outright, at least) from the first volume.

Previous book in the Man-Eaters series