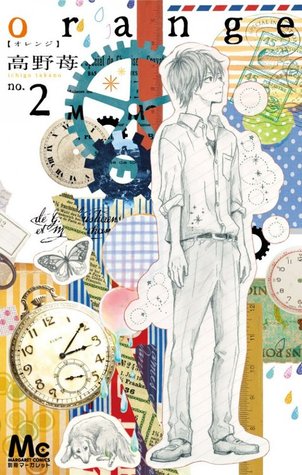 Orange 2 by Ichigo Takano
My rating: 4 of 5 stars

In the Spring she was 16, Takamiya Naho receives a strange, but detailed letter from herself, ten years in the future. At first she thinks the letter is a prank, but then the things written in the letter actually happen, including the new transfer student that sits next to her in class, Naruse Kakeru.
The letter reads just like her diary entries, down to the same characters. It is not till two weeks later, when Kakeru shows back up at school, that Naho finishes the letter.

In the letter, her 27-year-old self tells her 16-year-old self that her biggest regret is that Kakeru is no longer with them in the future, and asks her to watch him closely.

Volume 2 has us going more into Kakeru’s ‘future’ and hints of what happened in the time from the ‘present of the story’, while also sort of explaining the time travel. Among the friends, the relationship dynamics are in a love triangle, with Naho realizing her feeling for Kakeru, but Kakeru also knows that Suwa is in love with her; his own feelings are in a platonic stage I guess? Through the help of her letters, Naho has clues to how to make Kakeru happier, and she gets more insight into what he’s going through as he opens up about his mother. But obviously the reason he died is a complicated series of events, which the story realizes and make clear that it wasn’t a single event that led to it. As for the ending, it delivers a cliffhanger that totally changes your perception of the characters you had encountered so far. Overall, I felt it was an insightful arc.

Previous book in the Orange series