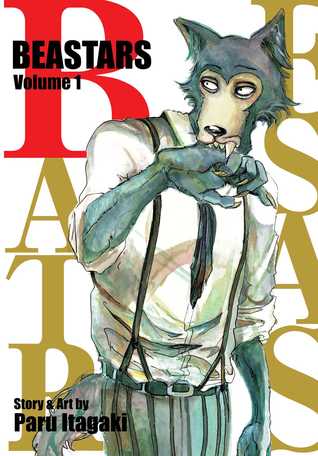 At a high school where the students are literally divided into predators and prey, it’s personal relationships that maintain the fragile peace. Who among them is a Beastar—an academic and social role model destined to become a leader in a society naturally rife with mistrust?

I think the best way to describe this would be ‘dark Zootopia’. The premise of this novel has a bunch of anthropomorphic animals living in a school, where a murder has intensified the divide between the ‘herbivore’ and ‘carnivore’ population. Lugosi, a grey wolf, tries his best to appear non-threatening, and he is pretty much a loner, so when one of his herbivore friends, Tem, an alpaca ends up dead in a manner that suggests a carnivore did it, he is naturally looked at with suspicion. Meanwhile, school politics have us looking at a variety of suspects, vaguely for now, as Tem was playing a major role in the school’s drama production. Lugosi, part of the crew, is taken under the wing of the lead actor, and head of the drama club, and while he seems like a gruff fellow, he has natural charm that could lead to him becoming the next Beastar.

The tense atmosphere of the novel lends to a good mystery feel. Lugosi is depicted in various lights (ha!) but the push and pull of his nature is not denied. The herbivores are naturally afraid of the carnivores because while they coexist, they still do have their natures, as becomes apparent through Lugosi. Still, the blanket fear and hate is explored, as well as the regular petty drama through an emerging character who has her own set of problems, aside from the whole herbivore-carnivore conflict. The art of the book is interesting and unusual in its style, and no, I am not saying that just because the characters basically look like furries. Also, the world-building of this story shows adequate forethought as to how such a world would work, especially with respect to food and living conditions.

Overall, it is an interesting start, with a set of complicated and intriguing characters.