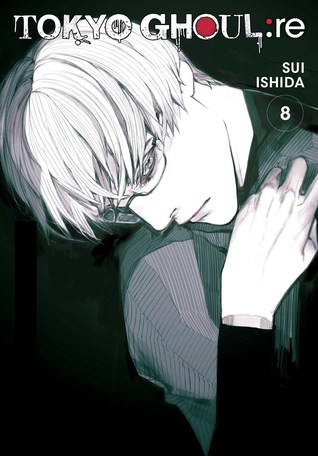 While Haise is determined to help his old friends escape from Cochlea prison, he doesn’t want to hurt any of his CCG colleagues. But his mentor Kisho Arima takes the decision out of Haise’s hands. In the midst of their heated battle, Arima makes an unbelievable move and confirms some of Haise’s greatest fears about the organization that has become his whole life. He lost everything once before. How will he handle it happening again?!

How can I properly describe my state of mind after reading this, except “WTF WAS THAT??”

I mean, this plot just delivered on a long game, and I am talking like a really long game. I am not even going to count how many twists were there, because then we’d be here all day. Mostly I expected this to be completely about the epic battle between the yet-again-newly-changed Kaneki and the Undefeated Arima (because there have been multiple-chapter-spanning-battles before), but this was also about the smaller players in this game. It called on some older characters, put the focus on some minor characters, and gave some other characters (especially the female ones) their time to shine. And THEN it also flipped the known world of this manga.

As two operations go on simultaneously – the attack on Aogiri at Rushima, and the attack on Cochlea – there are smaller battles happening. Each of them are given their due, even if the characters may be minor. One of the Aogiri tree’s members, Mazi’s backstory is explained as a way of explaining more of ghoul societies; she then proceeds to have an epic battle with one of Suzuya’s underlings and this battle is one of wits too, as both try to get an upperhand with surprise moves. You’d think with a major raid or fight happening every volume, it would all start to get repetitive but there’s never a boring moment. Kaneki’s creative strategies to disarm Arima were just brilliant. And then there was Arima spilling some truth tea and I was like, OMG this doesn’t make sense but also then it kinda does?! Like, what a risk to take, what a game to play!

On the character side, we learn about Naki (who is probably the only comic relief left in this dark pit of a horror manga) and his White Suits, and his awkward introduction to Mazi. Heck, there’s even Marude having to kill someone he has known for a long time. Then we have Torso’s childhood backstory (gee what a surprise it was terrible), and then Tooru’s memories come out (Kaneki style!) while deep in trauma: both quite messed up, and both with different ways of coping. Abused kids having a propensity for violence is practically the theme for this manga, and the violence just gets too creative (I can’t believe I am saying this, but poor Urie). And meanwhile, Kaneki is having to fight a person who is a father figure to him, and that just nearly broke my heart?

Verdict: I really should take a break after this volume, but I can’t stop now.